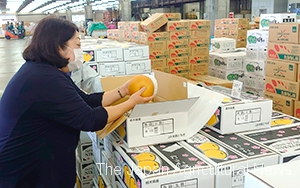 TOCHIGI, Jan. 9 – Overseas shipments of Nikkori pears produced in Tochigi Prefecture grew fivefold from a year before in 2021, hitting a record high of 57.7 tons, as local agricultural cooperatives made various efforts to promote the brand.

Seven farm coops in the prefecture cooperate to secure the pears for exports as their humongous size appeals to foreign markets, while Zen-Noh Tochigi, responsible for sales and marketing, took on the tasks of negotiating with buyers, coordinating shipment volumes, obtaining export certificates and inspecting products, in order to ease the burden on the cooperatives.

Nikkori is a large, late-maturing pear variety with good flavor, weighing 800 grams to a kilogram each. The brand is fit for overseas shipments as it can be stored for a long period of time.

In 2021, the variety was exported in October and November to nine countries and regions including Southeast Asian nations, Hong Kong and the United Arab Emirates.

The exports amounted to roughly 4 percent of total shipments of some 1,600 tons handled by agricultural cooperatives in the prefecture.

The pears had been exported by some farm coops since around 2004, but the shipments were temporarily halted following the 2011 Great East Japan earthquake.

When they resumed exports in 2014, Zen-Noh Tochigi called on the seven coops to cooperate in promoting overseas sales of the brand, and started exporting it to Thailand and Malaysia in 2015.

They are also working together with the prefectural government and a local association that markets farm produce to conduct sales campaigns in foreign countries.

The volume of exports had been increasing steadily from 12 tons in 2015, but shipments declined due to poor crops caused by a typhoon in 2019 and a cold weather in spring in 2020.

In 2021, they boosted exports by shipping not only the best-looking products, as they have been doing, but also products that are not perfect-looking.

Zen-Noh Tochigi adjusts the amounts of shipments and destinations according to demand situation and negotiates with buyers to enable exports of products packed for domestic shipments, further reducing the burden on farm coops.

They are aiming to expand exports even more in 2022.

“We are trying to secure products from all over the prefecture, but the supply is still short of overseas demand,” a Zen-Noh Tochigi official said.