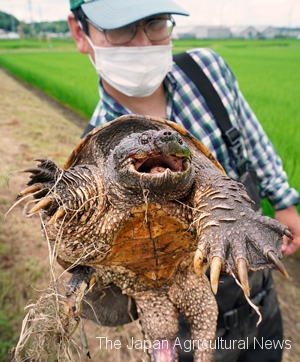 CHIBA, Jul. 27 – Chiba Prefecture is strengthening efforts to eradicate wild snapping turtles by catching many in a short period. The foreign amphibians become active from May to September. So, the prefecture is setting approximately 800 turtle traps in rivers and agricultural canals in the Inba-numa area, in which the turtles’ population density is high. An estimated 6,500 turtles were roaming Chiba Prefecture at the end of FY2019. This year, the prefecture plans to catch 1,197 to reduce the population steadily.

“What a haul! That’s beyond expectation!” In mid-July, three prefecture officials gathered at an agricultural canal in Yotsukaido City and screamed. The snapping turtle population density in the rice paddy area is high. Two days ago, they laid 23 traps in canals and rivers in the area. Today, they found 20 trapped turtles, and their containers were full. The largest catch today has a shell measuring 27 centimeters in diameter and weighs 4 kilograms.

The officials take notes of everything they catch. The traps catching many red swamp crayfish, a favorite food of the nasty creatures, have a higher possibility of catching more turtles in the future, they said.

Snapping turtles originally come from the Americas. In the 1960s, some people brought them to Japan as pets.

They are big, omnivorous, fierce, and quick to move. They break dikes and cause farmers serious harm with their bite. In 2005, Japan classified them as invasive alien species.

The prefecture decided to capture 18.2% of the estimated population every year to reduce the population to zero in the end. “We want to promote the study on ecological factors to catch them efficiently,” a prefecture official said.