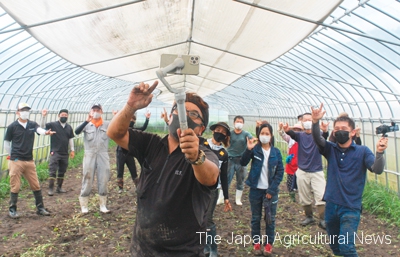 Okada (center) shooting a film for YouTube after the restoration work (in Akitakata City, Hiroshima Prefecture)

HIROSHIMA, August 26 -When the downpours that started on August 11 hit the greenhouses of a 51-year-old farmer in Akitakata City, Hiroshima Prefecture, he had a bunch of social media connected friends, 15 of them mainly from Hiroshima, to come and help his restoration work.

The farmer, Koji Okada, is a YouTuber, or NohTuber (“Noh” means agriculture in Japanese), who usually talks about all the good things about being a farmer on the online video-sharing site. This time, however, he posted a report on the severe water damage. Then, his friend NohTuber saw the video and called on his friends on social networking services (SNS) to support Okada’s restoration works.

Okada and his wife grow bok choy, a Chinese vegetable also known as Qinggengcai, in 12 greenhouses (3,600 square meters). On his YouTube channel “Happy Qinggengcai,” he usually posts movies about how he manages his farm and grows vegetables to become a successful farmer.

The downpour brought a lot of water into his greenhouses from the mountain behind them and caused the flood of about 60 centimeters deep. The water flew into six greenhouses of bok choy, which was just ready for harvest.

It was the third time for Okada to experience such large-scale natural disasters in his 13 years at the farm. In the heavy rain last year, he realized that his ditch was not strong enough and took measures to prevent the reoccurrences. But this year’s rainfall was far beyond his expectation.

Takayuki Harada (40) from Higashi-Hiroshima City saw Okada’s report in the movie and called on people on Facebook and other social media to come and help Okada. “I saw the video and thought I have to do something,” Harada said. “We must help each other, I thought, and so, I took action immediately.”

“I think I can get back to normal soon. I strongly felt the great power of Japanese agriculture,” said Okada.