Aichi farmers testing use of trained hawks to scare off crows 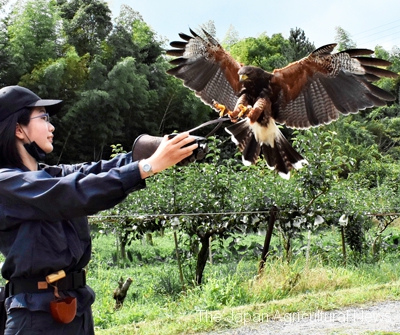 A hawker releasing a trained hawk at a pear orchard in Obu City, Aichi Prefecture

AICHI, Jul. 16 – A trial use of hawks to get rid of crows out of fruits growing areas started on July 15, 2021, in Obu City, Aichi Prefecture. The city will release trained hawks regularly at a local pear orchard to protect the fruits, which are now almost ready for harvest. Once the measure’s effectiveness is confirmed, the city plans to make it a standard pest bird control method in the area.

The demonstration is ongoing at a 1.5-hectare orchard of a 77-year-old local pear and peach grower, Yoshichika Kuwayama. The city has asked the Nagoya branch of a pest bird control specialist, Oyodo Corporation Ptex, to do the testing. The company’s staff, including hawkers, release two hawks at a time and let them fly over the orchard eight times a month to protect pears in the harvest time.

According to Kuwayama, crows eat ripe fruits and often peck and drop young bagged fruits. He once lost 20 to 30% of the products he grew in the orchard. After the preliminary testing, “the number of crows declined remarkably,” Kuwayama said with a bright expectant face.

In fiscal 2019, crow damage on local agricultural products totaled 7.2 million yen, but the number of houses and residents in the farming areas has increased and made it impossible to use hunting guns to terrify the pest birds. The city is taking other measures, as well, such as sound, to scare off the birds, while asking farmers to get rid of agricultural residue to develop a complete set of actions to make the area free from bird damage.