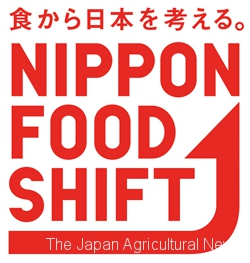 The logo for the new Nippon Food Shift campaign

TOKYO, July 21 – The Ministry of Agriculture, Forestry and Fisheries announced on July 20 the launch of Nippon Food Shift, a national campaign aimed at closing the gap between consumers and food producers.

The ministry will work together with the private sector to promote efforts made by the agriculture industry and farming villages, so that consumers will change their behavior and choose to buy domestically-made farm produce.

The ministry set up a website on the campaign the same day and started soliciting ideas to inspire consumers to appreciate the origins of their food.

The new basic plan for food, agriculture and rural areas, approved by the Cabinet in March 2020, says the government will start a new campaign on food and agriculture to increase people’s understanding for farming and rural villages.

The ministry will work with producers and the food industry under the campaign to promote through media and symposiums their efforts to increase the attractiveness of their products and rural life.

Different cases of such efforts will be shown on the website, which will function as the core of the campaign, starting with an agricultural corporation offering classes on locally-produced vegetables at high schools, a company selling Japan-made baked sweet potatoes in Southeast Asia and a system of consumers supporting green tea farmers by investing in tea fields.

New cases will be posted every two weeks and information on agriculture-related events will also be available on the website.