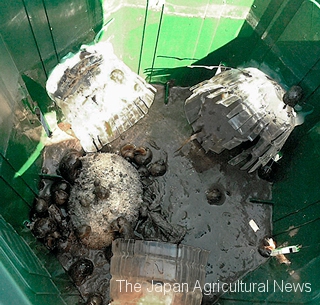 Chihiro Kuriyama won the Seki mayor’s prize with the invention, and the city plans to use the trap to get rid of the agricultural pest.

Kuriyama came up with the idea of developing a trap after a farmer told him that rice farmers are troubled by channeled apple snails causing damage to rice plants but they want to avoid using strong agricultural chemicals as much as possible.

He was shocked to see the big size of the snails and their pink eggs and set on creating a trap to help the farmers.

He made three holes, each matching the diameter of a plastic bottle, on the side of a plastic flower pot. Then he cut the plastic bottles, made lots of slits in the bottles and pasted them inside the pot to fit the holes. A lid is placed on the pot.

Channeled apple snails that enter the pot through the holes try to climb up the inside of the pot to escape, but when they get on the bottles, the slits are weighed down, preventing them from reaching the holes.

He mixed dried young sardines into rice bran and kneaded them into round balls to attract the snails.

With cooperation of farmers, he set the trap for half a day to two days in rice paddies in mid-August last year and managed to catch more than 30 channeled apple snails. He said he will continue the research on developing traps.

The Seki Municipal Government plans to produce some 50 traps based on Kuriyama’s idea, using funds from a project to cope with damages caused by channeled apple snails, and hand them out to farmers.