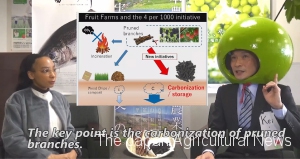 YAMANASHI, Mar. 13 – Yamanashi Prefecture has created a trilogy of videos in English on the prefecture’s official channel on the video-sharing site “YouTube” to present the charms of its agricultural products. It’s part of the initiative to address potential customers overseas, as delivering face-to-face messages is difficult due to the Covid 19 outbreak.

The prefecture has posted the three videos, releasing the first one in mid-February. Each content is about two to three minutes long, all spoken in English. They explain that Yamanashi is called the “Fruit Kingdom” and that it participates in the “4 per mille initiative,” a global program to cut carbon dioxide emissions, for the first time in Japan.

The presenter, Keiji Bannai, wearing a bright green “Shine Muscat” helmet, is Director General of Yamanashi Prefectural Government’s Agricultural Department. Through a dialogue with a native English speaker who works for Yamanashi Prefecture as a coordinator for international relations (CIR), he underscores the attractiveness of agricultural products grown in Yamanashi. All three videos were filmed and edited by officials of the prefectural government and proofread by the CIR.