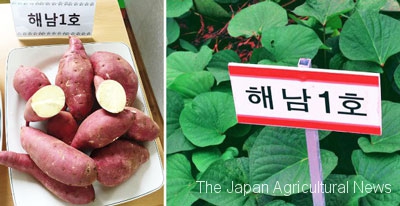 The photos show Haenam 1 sweet potatoes and their seedlings.

TOKYO, Nov. 15 – Japanese sweet potato variety Beniharuka is cultivated and distributed widely in South Korea without permission, it has been learned.

The variety already accounts for 40 percent of sweet potato cultivation area in South Korea, prompting many in Japan to express concern over South Korean-grown sweet potatoes getting in the way of Japanese products in the global market, as Beniharuka is regarded as one of the Japanese agricultural products with high export potential.

It appears that South Korean farmers who visited a sweet potato growing region in Japan took back Beniharuka seed potatoes without permission. Cultivation of Beniharuka began in Haenam in South Korea’s South Jeolla province around 2015 and occupied 40 percent of the nation’s total sweet potato cultivation area of 20,753 hectares in 2018.

In South Korea, the variety is sold at 1,000 to 2,000 yen per 5 kilograms, cheaper than the price of Japan-grown Beniharuka sold in Japan.

The reason why the cultivation of the variety spread quickly in a short period of time in South Korea was because a local publicly-run agricultural technology center performed tissue culture and provided low-price seedlings of the variety as Haenam 1.

The Japan Agricultural News contacted the Korea Seed & Variety Service – a subsidiary organization of South Korea’s Ministry of Agriculture, Food and Rural Affairs which specializes in seed management – by phone and asked how it will cope with the issue.

An official said over the phone that the person in charge was not available and that the organization would respond by email, but the email has not arrived as of Nov. 14.

Beniharuka was developed by the National Agriculture and Food Research Organization (NARO) and became a registered variety in 2010.

It is a highly popular sticky-type variety which is said to have sparked the baked sweet potato boom in Japan. According to NARO, the variety is cultivated mainly in the Kyushu and Kanto regions and sweet potato growing areas are working on making it a brand variety.

Exports of sweet potatoes reached 1.337 billion yen between January and September this year, rising 20 percent from the same period last year. It is regarded as one of the products whose exports are expected to continue increasing in the future.

Growers working to expand exports are concerned about the illicit outflow of seedlings.

“There is a growing demand for sticky-type sweet potatoes overseas as well,” said an official involved in sweet potato cultivation in the Kanto region. “There is a possibility that our products end up competing with South Korean products in the future.”

“We want the government to take effective measures,” the official said.

“We confirmed that Beniharuka seedlings have been taken to South Korea and China,” said an official of the Ministry of Agriculture, Forestry and Fisheries’ Food Industry Affairs Bureau, based on its investigation conducted in September.

However, it is difficult under the current system to demand South Korean farmers to stop production or claim for damage.

In order to exercise a plant breeder’s right for a variety in a foreign country, one needs to register the variety in that country. But according to the International Convention for the Protection of New Varieties of Plants, many countries including South Korea require applications for variety registrations to be made within four years after the variety started to be transferred to the countries, which means Beniharuka cannot be registered there.

The Diet is currently deliberating a bill to revise the law administering seeds and saplings to put restrictions on taking them out of Japan.