75 years after the bomb, Hiroshima is filled with flowers of peace: 37th National Urban Green Fair in Hiroshima 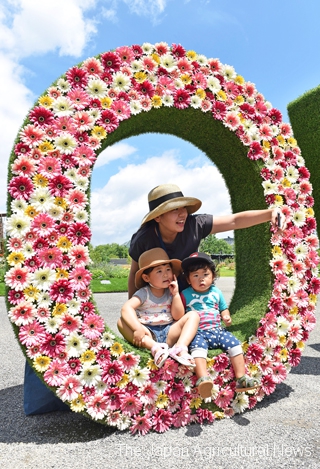 Family taking a picture at a photo spot at the main venue entrance (in Hiroshima City, Hiroshima Prefecture)

HIROSHIMA, Aug. 10 – The 37th National Urban Green Fair is taking place in Hiroshima, the city hit by the devastating bomb 75 years ago, putting prayer for peace on flowers and greenery. The main venue located right next to the Atomic Bomb Dome is filled with 120,000 flowers and greenery of about 300 varieties, mostly from Hiroshima Prefecture. Local farmers are working hard to support the fair that sends a message to the world that Hiroshima desperately hopes to realize lasting peace.

Hiroshima is the first city that was hit by an atomic bombing. The number of people killed by the bomb is approximately 89,000, according to the city, which still has many more people suffering the aftereffects. “Some said that no grass or tree would grow for 75 years in a bomb-hit area,” said one of the fair organizers, Soichiro Mitsutake, 55. “But please look at this. Flowers grown in Hiroshima are covering the entire area, showing the importance of peace.” That’s the purpose of the fair, which is also called Hiroshima Hananowa 2020, he explained. 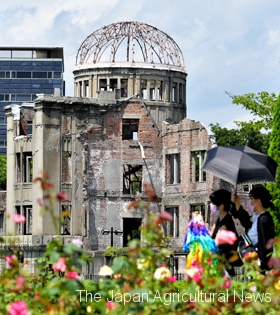 The 13,000-square-meter park is now filled with periwinkle, marigolds, Japanese bellflower, and other local flowers. Koji Murakami, a 49-year-old manager of Murakami Farm in Etajima City, produced 10,000 periwinkle pots for the flower show. “I feel honored to take part in the fair in this anniversary year. I want to add colors to the venue with flowers and greenery, which carry our prayer for peace.” Six local agricultural high schools also offer pansy, viola and other flowers to enchant the visitors.

One of the highlights is three-dimensional flower displays around the former Hiroshima Municipal Baseball Stadium. Hiroshima Scenery Zone is also popular among the visitors as a place to “make a tour around Hiroshima” by looking at miniature reproductions of famous sites such as the World Heritage Site Itsukushima Shrine, the Atomic Bomb Dome, and terraced rice fields. The entrance area with the flower arranged in letters “HANANOWA” is known as one of the best photo spots. Other highlights include a display of a professional baseball player of Hiroshima Toyo Carp and another featuring succulent plants with Izanaminomikoto, one of Japan’s major gods. 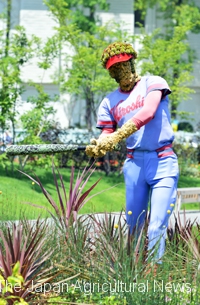 The Hope and Memorial Zone looks back on Hiroshima’s history from the post-war to the reconstruction period and sends a message for peace and recovery to the world. The Nippon Peace Garden is created under the theme of unity, featuring flowers from Hamamatsu City, Shizuoka Prefecture, and Kobe City, Hyogo Prefecture.

As measures to contain risks of COVID-19 transmission, visitors are required to take temperature and use disinfectants before the entrance. Hiroshima Hananowa 2020 is also held in four other sponsored areas in the prefecture.