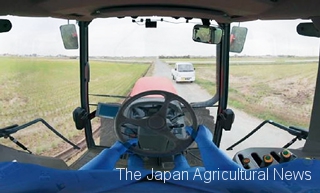 TOKYO, Mar. 27 – Japan’s National Mutual Insurance Federation of Agricultural Cooperatives (Zenkyoren) announced on March 26, 2020, that it developed a VR-based farm accident simulator for the first time in Japan. The system uses a virtual reality (VR) headset and a smartphone equipped with glasses exclusively designed for that purpose, and people can simulate five types of agricultural machinery accidents. The mutual insurance co-op will start renting the unit to local agricultural cooperatives in Japan (JA) in April this year, so that JAs can use it for training JA staff and local farmers and eventually prevent future accidents.

The five accidents it assumes are those while driving a tractor, operating walk-behind farm tools and a mowing machine, hand-operating a combine, and using a speed sprayer (SS) for pest control of orchard. Each VR movies will last for a few minutes.

The simulated images for a tractor accident, for example, will show you how you as a driver pull over the vehicle to avoid hitting oncoming cars, go too far, and roll over in the field. The content allows you to virtually experience the fear and danger you’ll have in the accident.

Zenkyoren also created four films to show the center of gravity of a tractor and cautions while working with a tractor. These four films are open to the public via the Internet.

The mutual insurance body said that by using both the VR-based simulator and the lecture films, you could learn not only fears but also the measures you should take in advance. “We hope this will be used on various occasions where local agricultural cooperatives, JA group staff, and farmers get together.”

According to Zenkyoren, the number of farm-related accidents in Japan is around 70,000 annually, including 300 fatal accidents. The accidents involving farm machines and tools are particularly dangerous and often become severe or fatal accidents. So, preventing such accidents is one of the urgent issues in the industry.

Virtual reality (VR)
A system for viewing three-dimensional digital images and movies by wearing a goggle-type headset. As the images you see with the headset will change following your movement, you’ll feel as though you are physically present in a virtual world. The technology is applied to more extensive areas such as educational programs, games, and training tools for constructors.