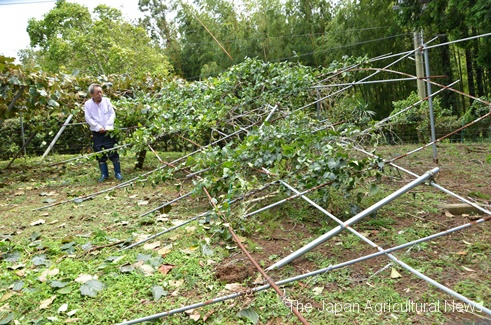 CHIBA, Sep. 10 – A strong typhoon Faxai landed Chiba, near Tokyo, before 5 a.m. It was the largest typhoon landed in the Kanto region and registered a maximum instantaneous wind speed of 57.5 meters per second in Chuo Ward, Chiba City, 49 meters in Kisarazu City, Chiba Prefecture, and 43.2 meters in Ota Ward, Tokyo. The powerful storm slammed pears, kiwis and many other ripe fruits and knocked down greenhouses, causing devastating damage on farmers. Local agricultural cooperatives (JAs) were swamped by the work to confirm the loss.

From September 8 to 9, the massive typhoon Faxai traveled over the Izu Island chain and the Kanto region before it reached the Pacific Ocean. It had a central atmospheric pressure of 960 hectopascals and a maximum sustained wind speed of 40 meters per second. It was the largest typhoon ever since the Japan Meteorological Agency began taking such records.

Kiwifruits smashed down in Chiba (JA Isumi)
Damages in the areas covered by an agricultural cooperative based in Isumi City, Katsuura City, Otaki Town, and Onjuku Town, were extensive. Strong wind and rain smashed pears and other agricultural products down to the ground, downed bamboos in the forests for growing bamboo shoots, and destroyed greenhouses. The blackout caused by electric-line troubles is still affecting approximately 2,700 households as of 6:30 p.m. on September 9.

Damages on agricultural products are massive. At a 25-are farm of a kiwifruits grower in Katsuura City, the strong wind wrecked trellises with ripe kiwifruits. Most of the leaves were blown away while 100 to 200 big ripe kiwifruits were smashed down. The 70-year-old farmer was planning to harvest them in November when they grew bigger. 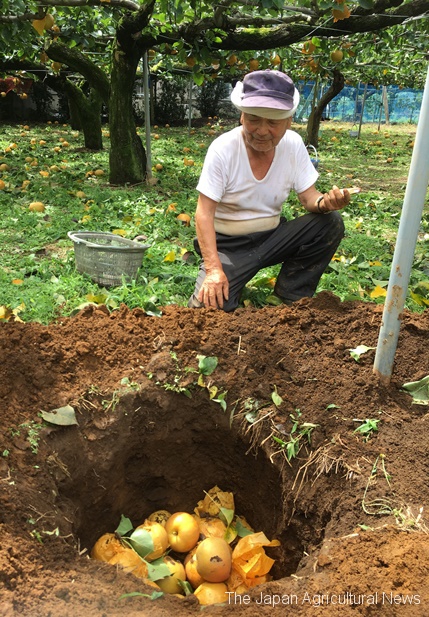 Ishibashi, a pear grower, picking up fallen pears and burying them into a hole. “This is hopeless,” he said sadly. (In Matsudo city, Chiba Prefecture)

An 85-year-old owner of a 30-are pear orchard in Matsudo city, Chiba Prefecture, lost almost everything he grew. “They’re all gone. They were almost ready for shipment, but I have nothing left for this season,” he said sadly, while tidying the orchard covered with fallen fruits. The typhoon has passed, and the temperature rose to nearly 35 Celsius degrees. The Niitaka pear grower picked up the fallen pears one by one and threw them into a hole he dug in the farm. The man was all in sweat.