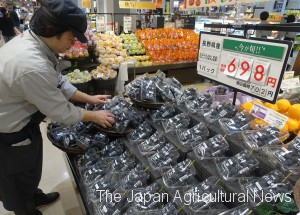 A higher-than-usual price tag is put on Kyoho grapes sold at a supermarket in Tokyo’s Shinagawa Ward.

TOKYO, Oct. 21 – Wholesale prices of black grapes such as Kyoho are rising recently, with the average prices of all black varieties marking a record high this year.

The price increase is attributable to the aging of farmers, as well as drops in production of black grapes, as more farmers are shifting to production of popular high-priced green grape variety Shine Muscat.

“(Black grapes) have often been offered at bargain prices to consumers, but they are becoming more of a luxury item,” a market dealer said.

Meanwhile, imports of black grapes are rising sharply amid shortage of domestic products.

The average wholesale price of black grapes sold by seven major dealers nationwide this year up to Oct. 19 was 969 yen per kilogram for Kyoho, up 7 percent from the previous year, and 1,031 yen for Pione, up 8 percent, both hitting the highest since the comparable records began in 2006.

“Prices are affected by a decline in the production volume,” said a wholesaler. “We feel there is a shortage also because the grape bunches tend to be smaller due to this summer’s heat waves.” The amount of Kyoho grapes sold by the major seven wholesalers totaled 3,402 tons during the same period, down about 40 percent from a decade ago.

The production of black grapes is decreasing because more farmers are shifting to the production of Shine Muscat. According to the national federation of fruit producers’ associations, the acreage for Shine Muscat this year totaled 814 hectares nationwide, posting a record high, thanks to increasing demand for the variety which is known for its high sugar content and which can be eaten with the skin on.

On the other hand, the acreage for Kyoho totaled 1,453 hectares, down 3 percent from a year before, and that for Pione amounted to 995 hectares, down 1 percent. JA ZEN-NOH Yamanashi in charge of distributing grapes produced by members of farm coops in Yamanashi Prefecture said Shine Muscat have grown popular among grape producers in the last decade or so because it is easy to produce, while other varieties are more vulnerable to climate change.

The price increases are affecting retailers as well. A supermarket in the metropolitan area said it usually sells Kyoho at 398 yen to 498 yen per bunch excluding tax, but this year the price is up by about 200 yen. “(Kyoho) is a popular table grape variety, but recently it is becoming difficult to sell it at bargain prices,” an official of the supermarket said. “It is also difficult to get the popular seedless type.” Producers say it is getting hard to meet the consumer demand.

Products imported from such countries as the United States are meanwhile increasing their presence in Japan, taking advantage of the low supply of domestically-grown produce. The Finance Ministry’s trade statistics show that imports of grapes reached 1,708 tons in August, surging 37 percent from a year before.

“Usually, we receive less orders when domestic production is at its peak, but this year more retailers are selling imported products along with domestic produce,” said an importer. “On the backdrop of rising prices of domestic products, we expect imports to continue increasing after September.”