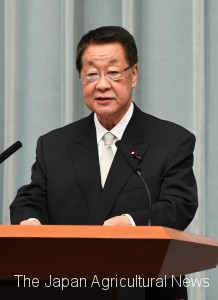 TOKYO, Oct. 3 ― Japan’s Prime Minister Shinzo Abe has retained key ministers in their posts including finance, foreign affairs and economy in the latest cabinet reshuffle, who have been handling thorny trade issues with the United States.

Motegi will lead the TAG negotiations with his U.S. counterpart, Robert Lighthizer. The new trade talks will likely start early next year.

At an Oct. 2 press conference following the reshuffle, Abe dubbed his new cabinet “a baseball team that all the players are striving together for victory.”

Last month, Abe was re-elected as leader of the governing Liberal Democratic Party (LDP), allowing him to be in office till November next year. That makes him the country’s longest-serving prime minister.

Abe’s reshuffle has been seen as a move to push ahead with his controversial attempt to amend Japan’s post-war constitution, experts said.