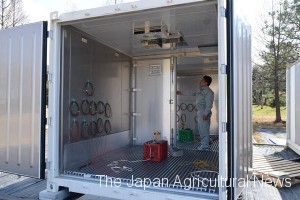 A newly developed container tested at the Fukuoka Agriculture and Forestry Research Center has two rooms which can be set at different temperatures.

FUKUOKA, April 3 – A research team in Fukuoka Prefecture has developed a dual temperature zone container for shipment of fruit and vegetables, which will be tested to export Japanese farm produce to Hong Kong starting later this year.

The container can be divided into two compartments of equal size with temperature gap of up to 20 degrees centigrade, enabling shipment of chilled cargo and frozen cargo together in one container, reducing the risk of damaging temperature-sensitive products.

The container also comes with a plasma generator to keep the products fresh. Developers hope the containers will pave the way for mixed-load, small-lot exports of high-quality Japanese produce.

A research team comprising officials of the Fukuoka Prefectural Government, academics and engineers of machinery manufacturers completed the container in September last year under the agriculture ministry-funded project aimed at keeping products fresh during ocean shipping which costs less than air freight shipping.

The team set up the container at the Fukuoka Agriculture and Forestry Research Center and has been testing its effect with about 40 agricultural products.

The container will be tested for exporting farm produce grown in Fukuoka, Kumamoto and Kagoshima prefectures to Hong Kong in June and again in December.

A twenty-foot container, the standard size for marine transportation, can carry eight tons of persimmons at a time for example, but it is difficult to sell a large amount of one item overseas. While exporters prefer mixing various items in one load, the appropriate temperature during shipment differs depending on the product, and inappropriate temperature control could damage the products’ freshness and quality.

The newly developed container is equipped with only one air conditioner just like traditional containers, but it can be used to set two different temperature ranges, thus helping users cut costs. The research team analyzed air flows and temperature changes in the container, and adjusted the ducts and fans to create two temperature zones with the maximum gap of 20 degrees centigrade. This means the container can carry a mixed load of items vulnerable to low temperature, such as cucumbers and eggplants, and fruits which need to be stored in low temperature.

The team developed a plasma generating device specially for the container to decompose ethylene gas and delay the degradation of farm produce. It takes four to five days to ship products from Japan to Hong Kong, and roughly 10 days in total before the products are marketed after clearing the customs. Appropriate temperature and ethylene gas control can keep the farm produce in good condition during delivery.

The research center hopes the containers, which enable transportation of small lots of various items while maintaining their freshness, will help boost exports of Japan’s farm produce.