App developed to estimate weight of pigs from their images 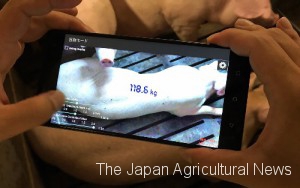 A photo provided by Itochu Feed Mills Co., Ltd. shows the estimated weight of a pig photographed using a smartphone with a newly developed application.

Determining the weight of pigs before shipment is important because pork carcass quality is first classified by weight and a carcass’ ranking will drop if it weighed below or above the standard.

Developers believe the new app can help reduce the burden on pig breeders, as more farms are increasing the number of pigs they raise and weighing them using a scale is becoming an exhausting work.

A user can photograph a pig from above and let the app scan the image. Then AI will estimate the pig’s weight based on its girth and length. In the case of hogs ready for shipment, weighing roughly 110 kg, the app’s calculation came within the range of 2.5 kg below or above the actual weight for 90 percent of the measurements. Developers said they are working to further improve the accuracy.

“We are hoping to apply the technology to younger pigs and cattle” in the future, an Itochu Feed Mills official said.

The service can be used even at farms where radio waves do not reach, because the app itself scans and processes images. Users need to access the network every month to make sure they are registered with a charge.

Developers said they plan to start offering the service in April next year at a monthly fee of 15,000 yen plus tax per device. The service is expected to become available first for Apple devices and later for Android devices, they said.