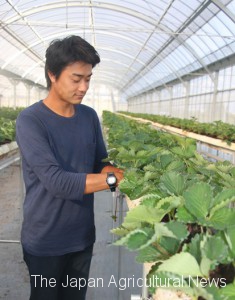 1. A farmer who grows Kirapika and Beni Hoppe strawberries in Yaizu, Shizuoka Prefecture, welcomes the recent moves to protect the domestically-developed varieties abroad

TOKYO, Sept. 23 – As some domestically-developed strawberry varieties are being produced in other Asian countries without permission, Japanese authorities are stepping up measures to protect the varieties.

The Shizuoka Prefectural Government is working to register Kirapika, a new strawberry variety developed in the prefecture, in China, South Korea and Taiwan.

Kirapika was registered in Japan this year after 17 years of development, and the prefecture plans to increase its production with the aim of making it the leading brand of Shizuoka which ranks fourth in Japan in terms of strawberry production volume. 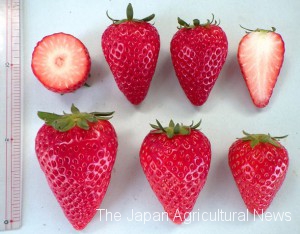 2. A photo provided by the Shizuoka Prefectural Research Institute of Agriculture and Forestry shows Kirapika strawberries developed in the prefecture.

The prefecture is rushing to register the variety abroad, as it learned a bitter lesson from the fact that its major strawberry brand Beni Hoppe has been produced on a large scale in countries such as China and is exported abroad. An official of a Chinese agricultural corporation which grows strawberries on a 5-hectare land in the Shaanxi Province and exports fresh and processed strawberries to 30 countries said: “Eighty percent of the strawberries we produce are Beni Hoppe. We hope to increase the number of popular Japanese strawberry varieties we produce.”

Because Beni Hoppe is not registered abroad, Shizuoka Prefecture have no means to prevent unauthorized cultivation or exports by growers in other countries.

“We developed Kirapika with a view to establish a brand,” said an official of the Shizuoka Prefectural Research Institute of Agriculture and Forestry. “This time around we will protect the variety so that it won’t be produced in other countries without permission.”

Fukuoka Prefecture registered Fukuoka-developed Amao variety in China 14 years ago. “It is important to take thorough measures to protect the genetic resources which are developed after years of efforts,” stressed a prefectural government official in charge of agriculture policies.

The prefectures of Mie, Kagawa and Chiba and the National Agriculture and Food Research Organization, which jointly developed Yotsuboshi, a seed propagated strawberry variety, are trying to protect it in cooperation with private enterprises.

The two selected seed companies, Sakata Seed Corporation and Miyoshi Co. Ltd., are given the exclusive right of selling Yotsuboshi seeds and plants in foreign countries while bearing the costs of registering the variety in the countries and taking other measures to prevent its unauthorized usage. In order to avoid foreign-grown strawberries from affecting the domestic market, the fruit will be sold only within the countries where the variety is registered.

Fearing that unauthorized cultivation and exports of Japan-developed varieties by foreign producers could hamper Japan’s export opportunities, the Agriculture, Forestry and Fisheries Ministry has been supporting registration of Japanese varieties abroad since fiscal 2016. The ministry made a request to allocate 434 million yen in the fiscal 2018 budget to continue subsidizing registration expenses.

“Due to repeated cases of outflow of brand varieties overseas, authorities have become more conscious of the need to protect them,” said an official of the Japan Association for Techno-innovation in Agriculture, Forestry and Fisheries.

A ministry official in charge of intellectual properties said: “If the varieties are registered abroad, it becomes possible to crack down on unauthorized cultivation. It is necessary to register varieties abroad to protect the value of quality-brand farm produce.”