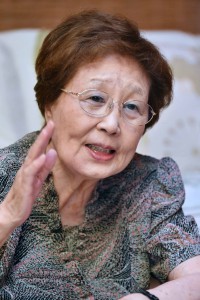 [By Kayoko Ebina, writer and essayist]

I often hear the phrase “Let’s hope the postwar era lasts for good,” but I hate that idea. The postwar period is dreadful. Because I was a war orphan, the postwar period was to me a lonely battle of life and death. Wearing sneakers with holes and shorts which were so tight that my thighs hurt, I wandered about in the burned ruins searching for food and the remains of my family.

War should never happen. We must never start a war no matter what. I want to say this to all the people in the world from the bottom of my heart. Let’s be friends. Let’s join hands.

I lost my father, mother and brothers in the Great Tokyo Air Raid. I survived because I had been evacuated to Numazu, Shizuoka Prefecture. I knew the war ended when I listened to the radio broadcast of the emperor’s speech in Anamizu, Ishikawa Prefecture, where I was moved to. A crying woman was saying everyone died for nothing. I felt frustrated. Even as a child, I wanted to think that people’s deaths weren’t meaningless.

After the war, I returned to Tokyo and everyday was like being in hell. I moved in with my aunt and her family in a small tin-roof hut. Adults always behaved hysterically because of lack of food. My aunt, who became like a different person, would say to me: “I wish you were dead.”

I was taken from one relative to another, and I was always hungry. I can never forget the big sweet potato which a demobilized soldier gave me on one winter day. It was so cold that I thought I would freeze to death, and as I was sitting with my arms wrapped around my knees, he came up to me and said: “Hang in there, girl. You must stand firm.”

There were times when I thought I would die. But at night, I would look up to the sky, shout “dad!” three times and wipe away the tears. I did so because my father wrote in a letter he sent to me while I was evacuated: “When you feel lonely, look in the direction of Tokyo and shout ‘dad’ three times to the sky.” After the war, I remembered this letter and followed his advice. Then I saw my father’s face in the sky.

My mother used to say: “Kayoko, you are a strong girl. Live happily with smiles. If you keep smiling, you will surely be loved by everyone.” So I was determined to keep smiling even when things were hard. Now at the age of over 80, I still follow what she said. Maybe that is one of the reasons why I got married to a rakugo comic storyteller.

Today’s Japan has become materially rich. People take it as a matter of course and there are fewer cases in which they appreciate what they have.

I believe the generation who has wartime experiences and who lived through the harsh reality of the postwar period has the mission to tell the horrors of war. We have to pass down the realities of war to the generations of our children and grandchildren as long as we live.