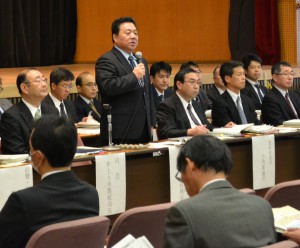 The Ministry of Agriculture, Forestry and Fisheries started a campaign in the city of Kumamoto on Thursday, Jan. 7, to explain the Trans-Pacific Partnership agreement, its impact on domestic farm production and the government’s measures to cope with expected changes.

Many of some 200 participants at the meeting, mainly officials of farm co-ops and local governments in the Kyushu region and Okinawa Prefecture, voiced concern over the government’s estimate on the impact of the agreement, which predicted that the current volume of domestic agricultural production can be maintained through the government’s support measures even after the agreement takes effect.

Some asked for estimates that do not take the government’s measures into account, and some questioned the consistency between the agreement which will abolish 80 percent of tariffs on farm products and the government’s goal of improving food self-sufficiency rate.

At the meeting, the ministry explained the government’s measures to assist farmers coping with market liberalization under the agreement. The measures include projects to support growers of all types of agricultural products and livestock farmers working to shift to more profitable crops and farming systems.

The ministry also said the nation’s agricultural losses as a result of the TPP agreement are estimated at 130 billion to 210 billion yen in terms of value, much less than the previous estimate. The ministry explained that the new estimates are made in view of tariffs and safeguard measures which will be maintained even after the agreement takes effect, as well as the government’s support measures.

“We will work on measures to help the agriculture industry so that they can make the TPP an opportunity to maintain business and develop more and more,” said Parliamentary Vice Minister Hidemichi Sato.

The ministry plans to hold the meeting in nine regions nationwide by Tuesday, Jan. 19, and also start having similar meetings in every prefecture to provide chances for municipal governments, farmers and local agricultural associations to exchange opinions with the ministry. The move is aimed at sweeping away anxieties among the farm sector by carefully explaining the contents of the TPP agreement and how the government is trying to cope with it.

The ministry’s campaign in prefectures will kick off in Aichi Prefecture on Friday, Jan. 8, and go on until Wednesday, Feb. 10, in Saga Prefecture. The meeting in Aichi will be held jointly with the one for the Tokai region. At each meeting, ministry officials will first explain the outline of the government’s measures and then describe them in detail according to each category, such as rice, other crops, horticulture and livestock farming.

The government unveiled an outline of measures in November to help domestic industries cope with the effects of the TPP pact. The government allocated funds for implementing more urgent measures in the fiscal 2015 supplementary budget draft which was submitted to the Diet on Monday, Jan. 4.