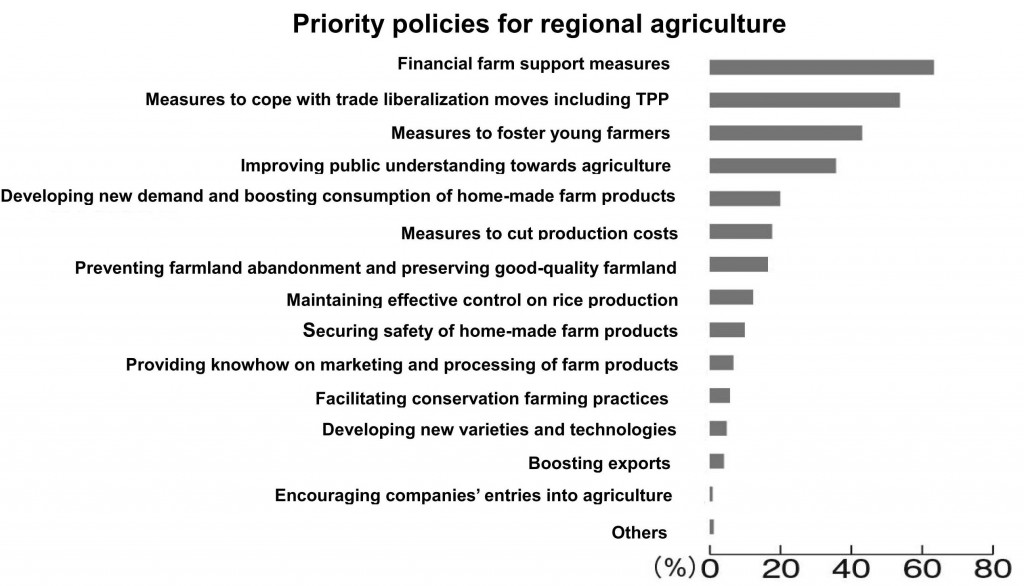 The survey was conducted in November on heads of 679 primary JAs nationwide, and 523 responded.

Asked to give issues of concern for regional agriculture, 83 percent, the largest percentage, chose aging and lack of successors, followed by 51 percent who said they worry about dwindling prices of farm products, 47 percent who are threatened by progress in trade liberalization moves such as the Trans-Pacific Partnership agreement and 39 percent who are concerned over reduced farm support policies.

The results indicate the farm industry’s growing anxiety over continuing decline in rice prices and expected influx of imports in the future, as farmers are facing the urgent need to foster young successors, maintain and expand their production infrastructure and increase agricultural income.

The government and the ruling bloc, which are scheduled to compile specific measures on the issues by fall, should respond to the farm industry’s calls for more protection against rapidly progressing globalization and come up with long-term assistance including legislation of farm subsidies. The government should continue revising and strengthening such measures along with the changing environment after the TPP agreement takes effect.

Respondents of the survey were also asked to comment freely on agricultural reform and policies taken under Prime Minister Shinzo Abe’s administration. Many voiced harsh opinions over the government’s policies regarding the revised Agricultural Co-operative Society Law which will take effect in April, the TPP agreement and regional revitalization.

More than 90 percent of the respondents were concerned over the effects of the revised law on JAs’ businesses. Some criticized the way the debate on the revision was prompted by proposal from the government’s Regulatory Reform Council. The revision “indicates a trend of pro-business bias which ignores the significance of co-operatives,” said one representative of a JA in the Tohoku region. “We should not allow the national government to interfere in co-operative activities,” wrote one representative from Hokkaido.

Regarding farm co-ops reform, one representative from Hokkaido said they have been and should continue making reform efforts. “Instead of denying everything, we should improve what should be improved,” a representative from the Tokai region said, stressing the importance of responding to farmers’ needs and changes of the times.

Many expressed concerns over the issue of restricting non-farmer members’ use of JAs’ services, which the law states the government will come to conclusion after five years. A representative from the Hokuriku region said non-farmer members are important partners of the industry who supports regional economy and agriculture.

Reflecting the fact that more than 90 percent of the respondents said they are unsatisfied with the Abe administration’s farm policies, many criticized the TPP agreement goes against the government’s goals of improving the nation’s food self-sufficiency rate and farmers’ income. The survey was conducted before the government released an outline of measures to cope with market liberalization under the TPP agreement.

Many supported the government’s move to regard agriculture as a growth industry, but one representative from the Tohoku region said expanding the size of farms and turning them into agricultural corporations will not be enough to strengthen global competitiveness.

“Budgets allocated for agriculture should be regarded as funds to be spent to protect not only farmers but also consumers’ lives,” wrote one representative from the northern Kanto region. “The government should take measures taking into account that local farmers’ activities contribute largely to regional revitalization,” said a representative from Hokkaido.