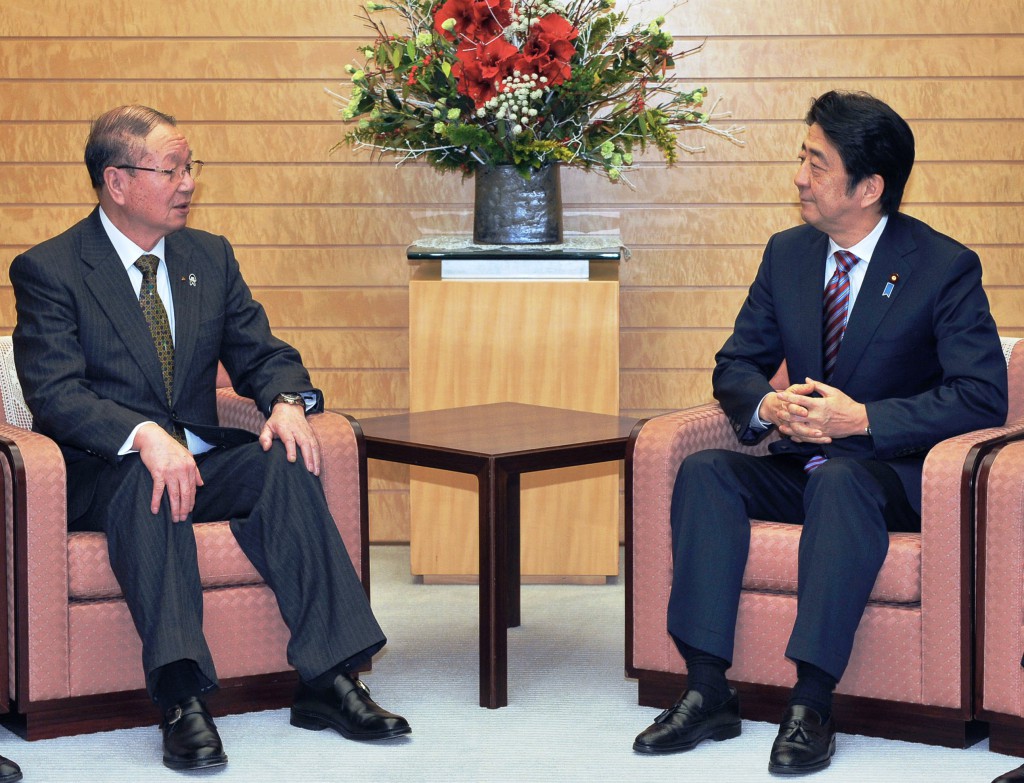 In a meeting held at the prime minister’s office for the first time since August, Abe and Okuno also agreed on the need to nurture ambitious farmers.

As the meeting was the first one held after the Trans-Pacific Partnership member countries reached a broad agreement, Okuno urged the government to implement long-term measures to cope with market liberalization expected under the agreement, such as legislating financial assistance to support farmers’ businesses.

Okuno and other JA group officials including Kenji Okamoto, vice chairman of the National Federation of Agricultural Co-operative Associations (JA Zen-Noh), exchanged opinions with Abe on such issues as the government’s outline for TPP-related policies and budgetary allocations based on the outline.

“Although the fiscal conditions are tough, we have made the utmost efforts to respond to farmers’ needs,” Abe said. “We hope to cooperate with you all to increase farmers’ incomes while strengthening competitiveness of the farm sector.”

After the meeting, Okuno told reporters that he thanked Abe for promising to legislate and create funds to financially assist farmers. Okuno said the JA group’s requests were reflected in the government’s move to include in the policy guideline a legislation of measures to support stockbreeders and also create funds in the fiscal 2015 supplementary budget to finance projects to strengthen farming regions and community efforts to promote livestock breeding.

However, Okuno pointed out that concerns remain, adding that the JA group plans to submit proposals to the government to be reflected in TPP-related measures which will be compiled in autumn next year.

Referring to the government’s estimates of the effects of the TPP agreement released on Thursday, Dec. 24, Okuno said he will continue asking the government to implement measures to make the effects work positively for the agricultural sector.

Okuno also said he told Abe that JAs nationwide are helping nurture ambitious farmers, and Abe replied that the JAs’ efforts and the government’s support measures will create a synergy effect to foster people who will succeed the farming business.