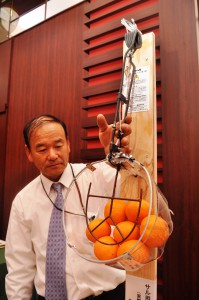 Sugimoto Kogyo based in Komatsushima, Tokushima Prefecture, has developed the nation’s first snare trap for wild monkeys. The trap is designed to be hung vertically at a certain height above ground, and captures monkeys by tying up their arms by wires when they try to reach for food set inside. It will require less space than box traps, and is easy to install.

A wire trap is placed on the rim of a transparent container with a diameter of about 25cm. If a monkey reaches for fruits set inside the container and tries to take them out, its arm will be trapped.

The trap can be hung from pillars or trees in orchards and crops, or under the eaves of houses. Last year, the firm experimentally hung the traps on wire mesh fences at two locations in the prefecture where damage by wild monkeys have been reported. A monkey was captured at both locations within a week, with more catches reported about once a month.

“If a monkey is caught in a trap, it will have the effect of keeping other monkeys away,” says the firm’s official. “It is an easier way (to avoid wildlife damage to crops) compared with large box traps or hunting guns which cannot be used near residences.”