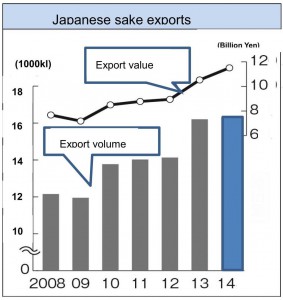 The Japanese government will boost exports of Japanese sake, as some member countries of the Trans-Pacific Partnership free-trade talks agreed to remove tariffs on sake, while the United States, the largest importer of sake, plans to allow the use of the name “Japanese sake” only to those brewed in Japan.

Although sake exports are increasing every year, its share in the global market remains small. The government hopes to expand sales of sake through conducting promotional campaigns at home and abroad, as well as utilizing the geographical indication system to protect domestic brands.

In the TPP negotiations, the U.S., Canada and Vietnam agreed to eliminate tariffs on sake. In addition, the U.S. government is expected to ban sales of products brewed outside Japan as “Japanese sake.” Such moves are likely to facilitate overseas sales of home-brewed sake, as such products will be differentiated from similar products made in other countries such as the U.S. and China.

The National Tax Agency is planning to decide on the geographical indication of “Japanese sake” as a home-brewed alcoholic drink made from Japanese-grown rice. If the envisaged geographical indication is approved by other countries, Japan can ask them both under the TPP framework and in negotiations for bilateral economic partnership agreements to crack down on foreign-made products sold as Japanese sake.

Exports of Japanese sake marked a record high of JPY11.5 billion in terms of value last year, and those for this year are likely to post a new record. They are exported mainly to the U.S., Hong Kong, South Korea and China. However, the amount is small compared to France’s wine exports which amounts to JPY1 trillion, and the sake industry is working to increase the presence of Japanese sake overseas.

The Japan Rice and Rice Industry Export Promotion Association, which also has sake brewers as members, this year invited notable chefs from well-known restaurants overseas to visit sake breweries and offered them an opportunity to learn about Japanese sake culture. The association also recommended sake brands that match their dishes. The Ministry of Agriculture, Forestry and Fisheries listed in its export strategy Europe, Taiwan and China, in addition to the U.S. and Hong Kong, as markets to focus on.

In the basic policy outline of TPP-related measures, the government pledges to promote Japanese-made alcoholic beverages abroad. It is planning to protect not only Japanese sake but also other Japan-produced alcoholic drink brands in overseas markets through geographical indications.

The U.S. said in the TPP negotiations that it will only allow Japan-made products to be sold in the nation for alcoholic beverages covered under the geographical indication system. Currently, six names – Hakusan for sake and Yamanashi for wine, as well as Iki, Kuma, Satsuma and Ryukyu for shochu distilled spirits – have been designated as geographical indications.

The U.S. also agreed to begin procedures to relax bottle size restrictions on spirits, which will make U.S.-bound exports easier for Japan. Currently, distilled spirits such as shochu and whisky can only be exported in 750ml bottles, but if the rule changes, they can be shipped in 4-go (720ml) bottles, the standard size in Japan.