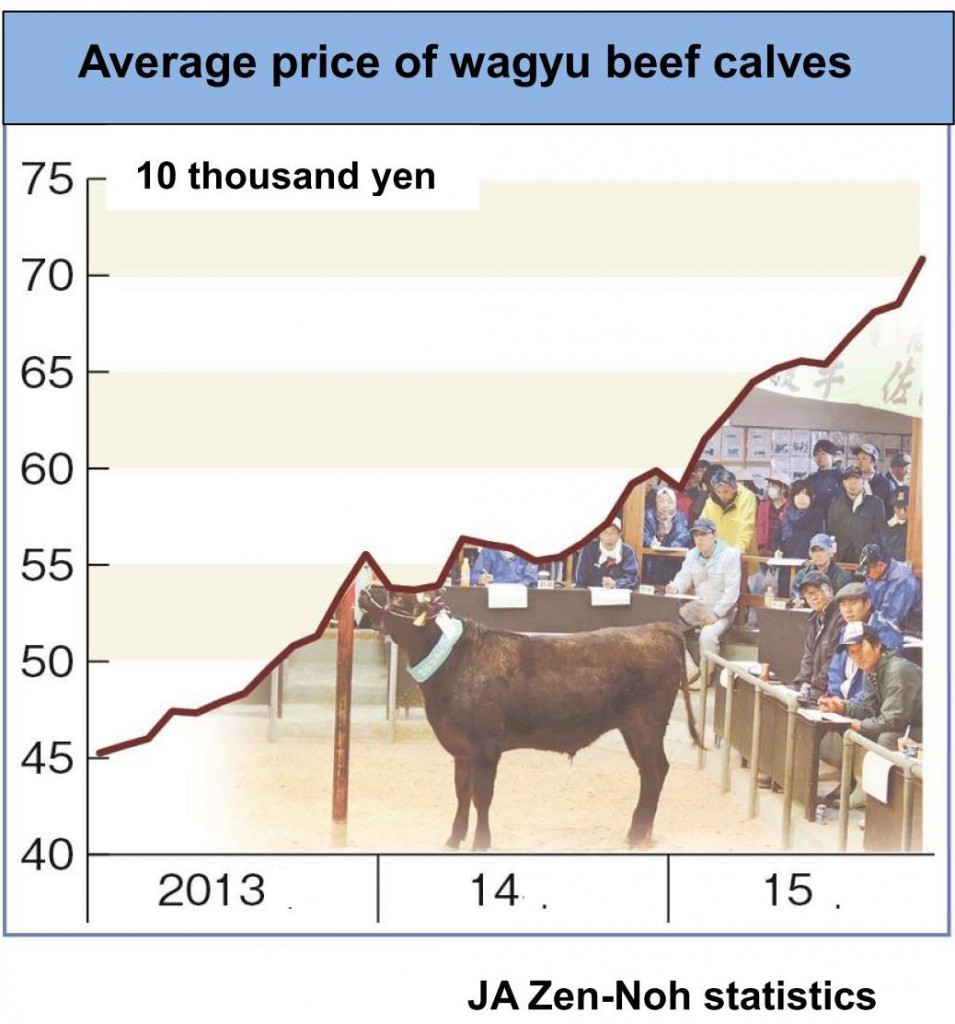 The average price of Japanese wagyu beef calves topped JPY700,000 for the first time in November, according to the National Federation of Agricultural Cooperative Associations’ (JA Zen-Noh) data on calf trading at major livestock markets nationwide. The price rose by as much as 50 percent in the last two years. Market participants attribute the price rise to increased purchase of calves by cattle fattening farms which shipped cattle ahead of the period of highest demand, while the supply continued to be sluggish due to a decline in the number of cattle breeding farms.

“Prices of dressed carcasses could drop below costs for cattle fattening farms, as the prices (of calves) won’t decline unless their number increases,” said one of the market participants. A cattle fattening farmer of Fukushima Prefecture said farmers have to continue buying calves even if they are priced high, because they need to fill the vacant space in their barns.

The average price of a calf was JPY708,345 in November, up 3.4 percent from the previous month. Prices marked an increase in 90 percent of the 43 markets which held calf auctions. The number of traded calves rose 2,375 from the previous month to total 26,411. However, the amount of trading remains roughly 10 percent lower than two years ago.

Meanwhile, the average price of bullocks also posted a record high of JPY751,153. It topped JPY1 million at Tajima and Awaji livestock markets in Hyogo Prefecture. The average price of cows was JPY654,040, up 3.4 percent from the previous month, backed by increasing demand among breeders.

Hiradoguchi Chuo livestock market in Nagasaki Prefecture marked the largest increase in the average price among 43 markets nationwide. The overall average price at the market was JPY740,997, up 10 percent from the previous auction. Some 200 buyers from Nagasaki and other prefectures joined the auction. “It is rare for the market to be filled with so many buyers. I wasn’t expecting prices to rise so much,” said one of the market participants.

Rising trend in prices continues to be a burden on cattle fattening farms. One farmer from the Tohoku region expressed fear that the Trans-Pacific Partnership agreement would lead to an influx of imports of low-priced beef. Since December is the month of highest demand for dressed carcasses, many market participants predict the prices of calves to rise even further.