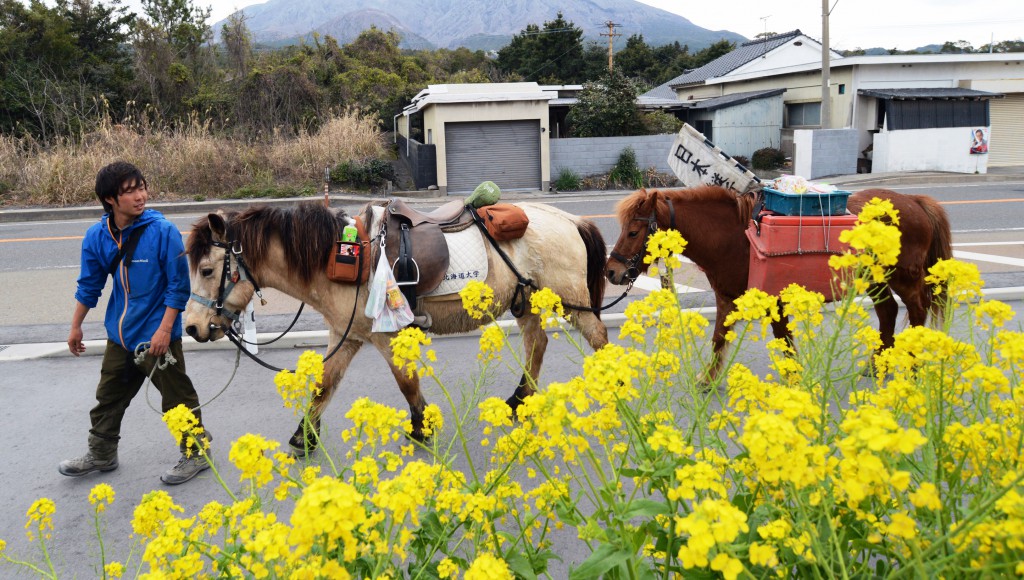 Kohei leading Yuki (center) and Mitchy (right) on Sakurajima Island. He always pays attention to health of his mates (in Kagoshima Prefecture)

A 24-year-old undergraduate student in his sixth year in Faculty of Veterinary Medicine, Hokkaido University, is now in the course of a long journey through Japan, surprisingly walking all the way from Hokkaido to Okinawa on foot with two Dosanko horses. The student, Kohei Yamakawa, says he wants more people to know that there are some extant Japanese indigenous horse breeds including some critically endangered. Kohei and his two Dosanko horses, native to Hokkaido, left Sapporo, Hokkaido, in August 2014 and now they are almost there at goal, the Yonaguni Island of Okinawa. 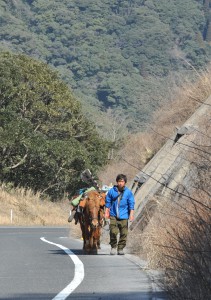 Late February, Kohei and his mates, Yuki and Mitchy, were walking up the hill in Tarumizu-shi, Kagoshima Prefecture, and heading to Sakurajima. Kagoshima was the 22nd prefecture for them to visit after they walked approximately 2,700 kilometers. The two horses made their ways silence on the busy road along with their master who sometimes spoke to them gently to encourage them.

The man who loves horses bought the two Hokkaido horses using money he earned from part-time jobs. Then he decided to take a temporary leave from the university to set off the travel. He puts some bags on the horses and walks with them 30 kilometers per day. To make the burden on the horses lighter, he got rid of all his cooking equipment in Aomori Prefecture, which was the first prefecture they visited. 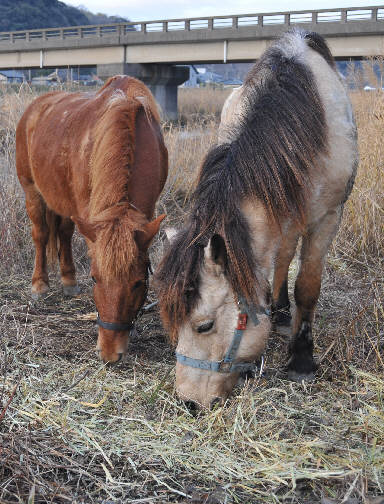 The party camps on banks or other open spaces, or stays at barns of equestrian clubs of other universities. When sleeping outdoor, Kohei ties the horses to a strong tree and sleeps in a small tent. He lives mainly on bread and canned food.

His mates are stars everywhere. Dosanko horses are smaller than other breeds and people often think they are young ponies. “You are so cute,” many talked to them, while they are walking in urban areas in Kagoshima City. The trip is also supported by many people including a truck driver who handed him a drink or some people who offered money for them to keep going. Even ferries between Sakurajima and Kagoshima City, which usually do not accept horses, made an exception for the three travelers.

This journey is going to be concluded on March 3 when the man and the horses arrive at the port of the Yonaguni Island in Okinawa. Then Koichi will probably go home on cargo ships with the horses and soon start job hunting. “Walking a long way together, I can thoroughly understand the feeling of my horses. So I want to look for a job that will allow me to live with them. I also want to write books on the journey when I return home,” he said. 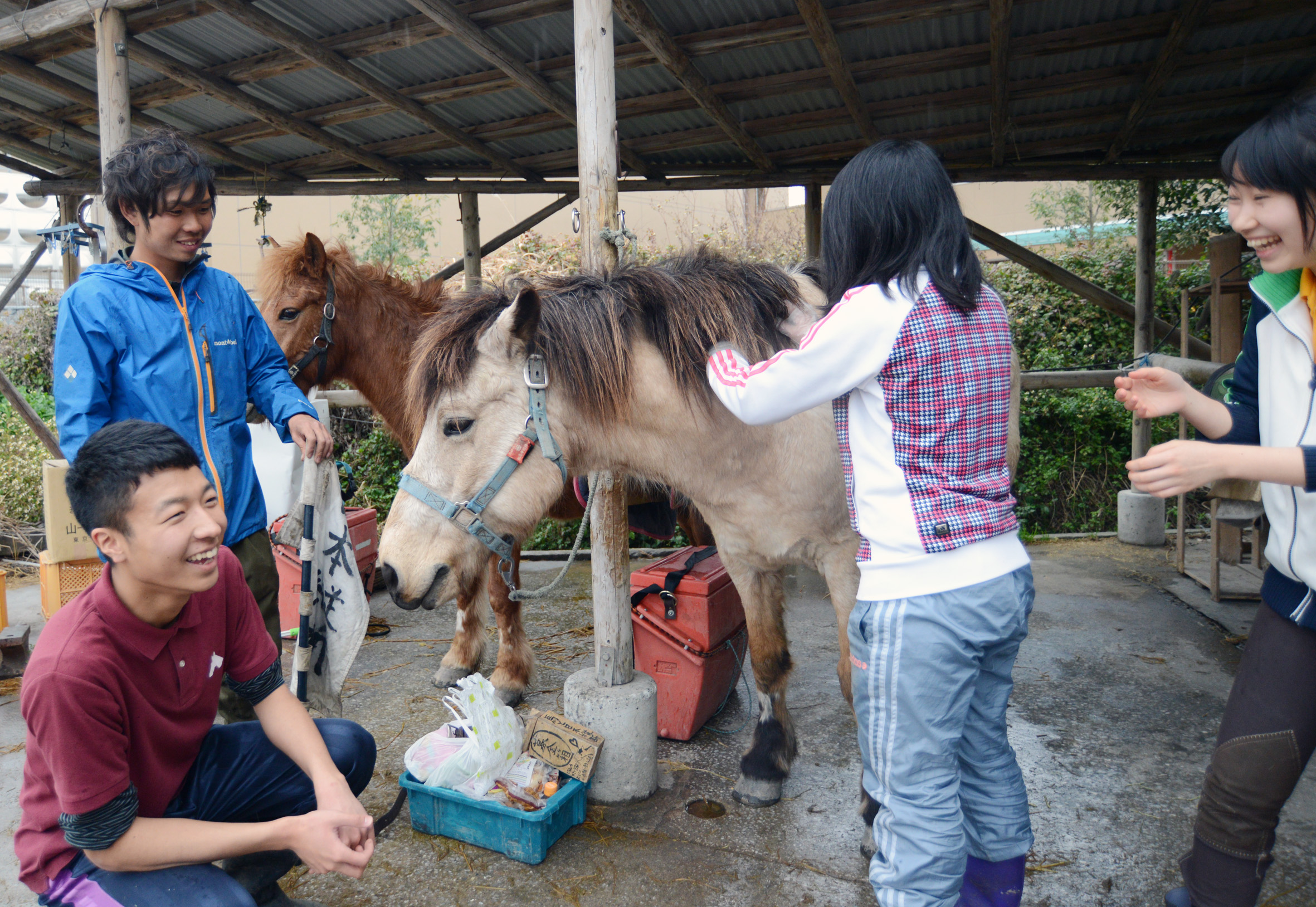 Making friends with members of equestrian club of Kagoshima University 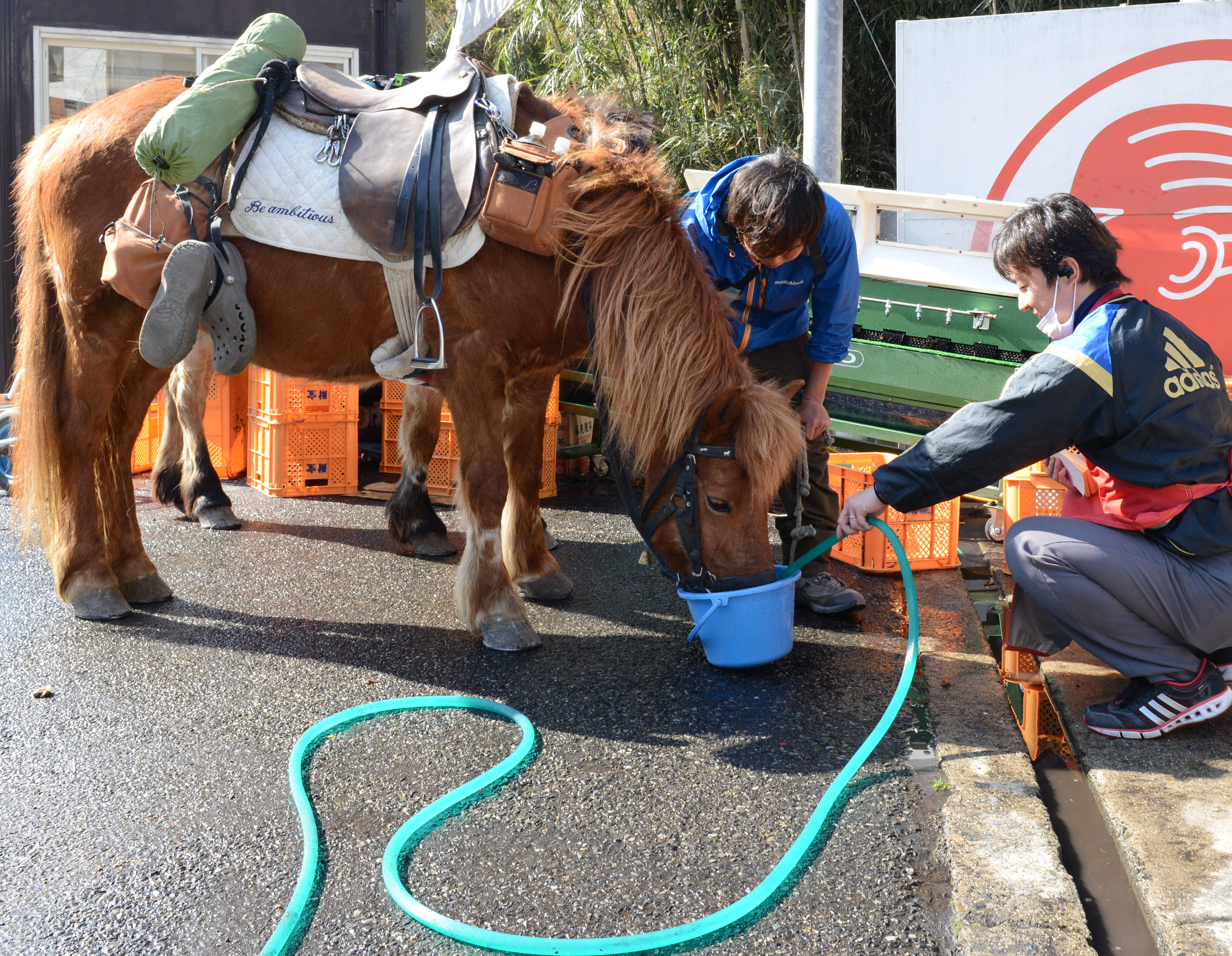 Feeding water (not petrol!) at gas station. Horses emptied the bucket in a few seconds