Koya Nishikawa, chairman of the ruling Liberal Democratic Party’s committee on
the Trans-Pacific Partnership free-trade talks, who is in America to negotiate TPP, had talks on July 14 with executives of agribusiness and food-related firms like the world’s largest grain company Cargill. Nishikawa urged the United States to concede as well as asked for their understanding of Japanese claims to protect the sensitive agricultural products. 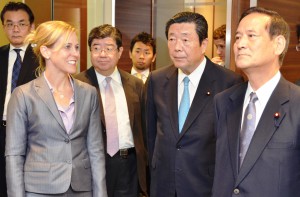 Nishikawa had talks successively with Cargill vice president Devry Boughner, Tyson Foods vice president Charles Penry, and Tami Overby, vice president of the U.S. Chamber of Commerce.  Each of them has great influence on U.S. Government and Congress.  Hiroshi Moriyama, vice chairman of the LDP’s committee dealing with agricultural trade, also attended the meeting and explained the policy that Japan would continue negotiation based on the Diet resolution and the LDP’s campaign promises which call for protection of the sensitive agricultural products.

“The U.S. is not suffering any loss under the current tariff system. Now, imported rice and wheat from the U.S. are well treated,” Nishikawa insisted in a series of talks.  Nishikawa indicated if completely free competition was put into effect as a result of TPP negotiations, it was possible that U.S. products would lose to Vietnamese rice or Australian beef in price competition, and also lose competitiveness in the Japanese market.

Moreover, Moriyama pointed out U.S. agricultural organizations were insisting Japan should be excluded from TPP negotiations, and opinion advertisements criticizing Japan were set up at subway stations in the city of Washington.  Moriyama expressed a sense of regret saying “These are sad situations for an alley.”

However, U.S. firms and groups all emphasized the viewpoint that the negotiations wouldn’t come to an agreement without Japanese concessions, and also stressed the TPP’s general principle aiming at high-level trade liberalization.

Nishikawa and others will also have talks on July 15 with U.S. Trade Representative Michael Froman and seek his understanding of Japanese claims.