The first case of kiwifruit bacterial canker disease Psa3 in Japan has been confirmed in Ehime Prefecture, the nation’s largest kiwifruit production area, and the prefectural government announced on Friday, May 9, that it will cut all the trees in the orchards where the outbreak occurred.

Ehime Gov. Tokihiro Nakamura said the prefectural government was expected to finish cutting down all the trees in the infected orchards totaling 2.2-hectares by Saturday, May 10, adding that it will offer emergency financial assistance to kiwifruit growers’ disease prevention measures to reduce their burden.

“The impact of the disease is extremely large, although the outbreak was limited to a small area compared to the prefecture’s total production area of 423 hectares,” Nakamura said. “I hope we can get over the crisis by preventing it from spreading and pinning it down now.”

Psa3 is the most virulent strain of Pseudomonas syringae pv. Actinidiae which causes cankers, production of exudates and cane and shoot dieback and browning on vines. The disease spreads via the bacteria-laden exudates, which are scattered by wind and rain or by sticking to farm equipment. Fruits are not affected, but the disease could destroy trees of some varieties.

Psa3 is giving serious damage to orchards in major kiwifruit producing regions such as New Zealand and Europe.

The prefectural government first issued a special warning on Friday, May 2, after finding infected trees in the cities of Saijo and Imabari. As of Friday, May 9, infections are confirmed in a 40-are area growing Raibow red, and a 1.8-hectare area growing Hort16A sold as Gold Kiwifruit.

The prefectural government has been cutting infected trees in cooperation with the municipal government and agricultural cooperatives, after getting approval from orchard owners. The owners are predicted to suffer income losses of some JPY30 million this fiscal year, and sufficient support measures will be necessary for them to continue their business. 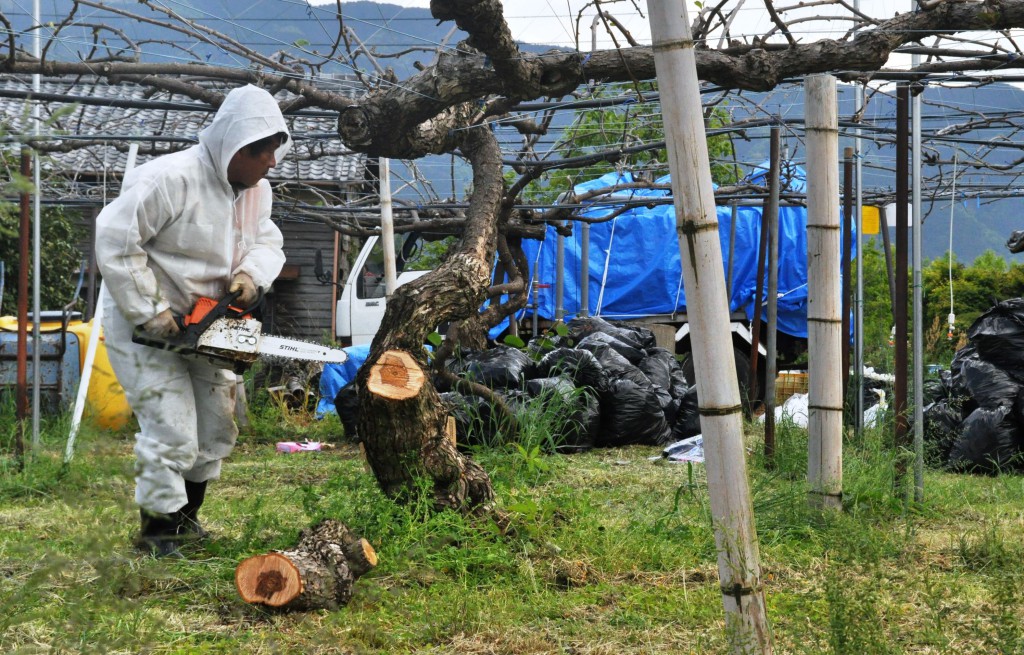 A man cuts a Psa3-infected kiwifruit tree using a chainsaw in an orchard in Saijo, Ehime Prefecture.