Japan should cooperate closely with other countries to make the United States more flexible in negotiating for the Trans-Pacific Partnership free-trade talks, Koya Nishikawa, head of the ruling Liberal Democratic Party’s TPP panel, said in an interview with The Japan Agricultural News, prior to March 15 which marks the one-year anniversary of Japan joining the talks. 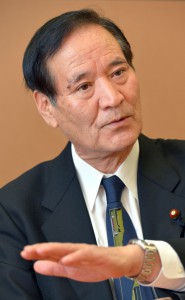 Q. What was the LDP’s stance concerning the TPP negotiations in the past year?

A. Reaching agreement in the TPP talks is one of the important pillars of the Abe administration’s growth strategy. While Japan’s agricultural industry is under attack from other nations, Prime Minister Shinzo Abe and U.S. President Barack Obama recognized certain agricultural products for Japan as trade sensitivities during their meeting in February 2013. The LDP has worked together with the government, aiming at meeting both goals of maximizing national benefits while protecting the agriculture, forestry and fisheries industry. We want the governments to conclude the talks soon, but we do not want them to compile an agreement in a way that is inconsistent with the campaign promise the LDP made with the Japanese people.

Q. The U.S., however, is asking for tariff elimination without exception, despite Japan’s request to leave out sensitive agricultural products from negotiations.

A. The U.S. continues to stick to principles, but Japanese negotiators also have not yielded a single point. We know the ideal situation is free movement of goods and people, but we should be flexible enough to take into account the different situations of one another when we negotiate. Aside from Japan’s key farm products, Vietnam is faced with the issue of privatizing state-owned enterprises, which cannot be realized soon and needs to be treated sensitively. Negotiators should seek balance when compiling an agreement.

Q. When Obama visits Japan in April, the TPP talks will be a significant part of the agenda at his summit meeting with Abe.

A. We should make him understand that there are circumstances in Japan which do not allow tariffs on certain agricultural products to be abolished. The U.S. also hasn’t made clear when it will abolish auto tariffs, and there are some U.S. states with “Buy Local” legislation which do not provide foreign companies equal access as domestic firms to government procurement contracts. We should take into consideration trade sensitivities of each country.

We believe the TPP negotiations will reach agreement if the U.S. shows flexibility in treating Japanese agricultural items, but the U.S. side believes the negotiations can be concluded if Japan agrees to liberalize its agricultural market. The two countries are totally opposite in this issue.

Q. Is there a way to break the deadlock?

A. Until now, Japan has been focusing on bilateral negotiations with the U.S., because the government thought that if the two countries reach agreement bilaterally, other nations will follow. But considering the past negotiations conducted under the World Trade Organization, the important point is how to form a group with other nations. Now we are starting to cooperate with countries other than the U.S.

Q. Is your scheduled visit to Australia part of such efforts?

A. I was invited by the Australian government to meet Australian Minister for Trade and Investment Andrew Robb on March 17. Negotiations on the Japan-Australia Economic Partnership Agreement have been going on for as long as seven years, and it has become an issue of concern for both countries. I hope the two countries will reach agreement at the time when Australian Prime Minister Tony Abbott visits Japan in April. There is a high possibility of the two countries solving remaining issues and concluding the agreement if they negotiate.

The TPP talks and the EPA are separate negotiations, but consequently they are highly likely to be connected together. If we can conclude the EPA, it will become one standard for the TPP talks to follow.

Q. However, Australia is demanding that Japan open its agricultural market.

A. Australia will surely ask Japan to lower its tariffs on beef. It is the government which will be responsible for negotiating. My job is to tell Australian officials to listen carefully to Japanese negotiators if they want to reach agreement.

This entry was posted in Trade Talks and tagged Interviews. Bookmark the permalink.