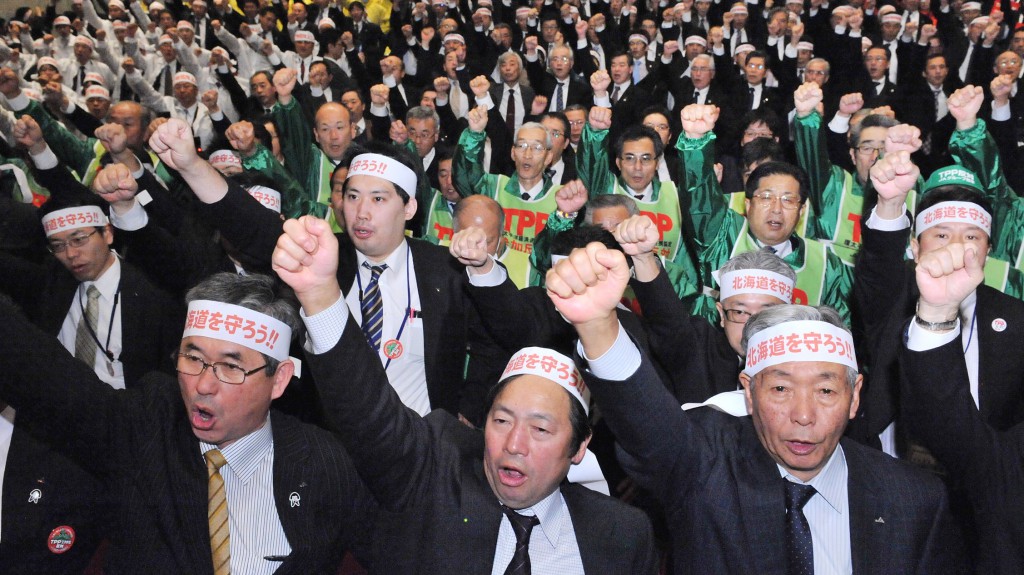 Representatives of farmers raise a shout in unison in a rally in Tokyo on Thursday, Feb. 20.

Ahead of the ministerial meeting of the Trans-Pacific Partnership free-trade talks scheduled to begin on Saturday, Feb. 22, some 800 representatives of farmers nationwide gathered in Tokyo Thursday, Feb. 20, to urge the government and the ruling Liberal Democratic Party to protect farm products.

Mitsuo Murakami, vice head of the Central Union of Agricultural Cooperatives (JA-Zenchu), pointed out that fears are growing among farmers over reports that Japan is considering making compromises in the TPP negotiations. He said he “is doubtful and even angry toward the government’s hasty, weak-kneed attitude,” and demanded that the government and the LDP keep the resolutions adopted by the party and the Diet’s agricultural committees, which pledge to protect key agricultural products from tariff elimination.

In response, LDP Secretary-General Shigeru Ishiba expressed determination that the government will keep its pledge, saying it was not anything of a joke for the party and the Diet’s committees to state the government would withdraw from the talks if the resolutions cannot be met. Koya Nishikawa, head of the LDP’s TPP committee, also stressed that the negotiators will keep the farmers’ feelings in mind.

Hisashi Inatsu, acting chairman of New Komeito’s agriculture and fisheries division, said the party will act decisively with the LDP to meet the Diet resolutions.

In a speech representing farmers, Koji Futada, chairman of the National Chamber of Agriculture, asked the government to protect national interests, saying the LDP senior officials’ past remarks that Japan will not remove tariffs on any of the key agricultural products remain valid. Representatives of fisheries and forestry organizations also asked the government to protect national interests in the TPP negotiations, including nontariff barriers, in order to maintain regional economies.

The participants unanimously adopted a resolution, announced by Keiko Okawara, chairman of the JA group’s national association of women, stressing that it is inevitable to realize the resolutions of the LDP and the Diet’s committees for farmers to fulfill their responsibility of providing safe food products. They hoorayed in unison, led by Hidetoshi Yamashita, chairman of the JA group’s national youth association.

This entry was posted in Trade Talks and tagged News. Bookmark the permalink.