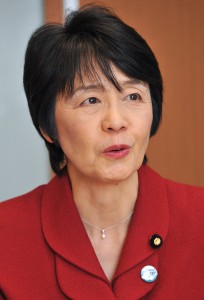 Q. How will the party cope with issues related to agricultural reform?

A. We have to stop Prime Minister Shinzo Abe’s administration which is going out of control also in terms of agricultural policies. Abe has been ignoring the voices of the people in the agricultural sector and rural communities, and adopting policies which strongly reflect the voices of business circles, such as joining the Trans-Pacific Partnership free-trade talks and revising the rice production adjustment system.

Especially concerning the TPP talks, the government is putting top priority on concluding the talks as soon as possible, without disclosing any significant information to the Japanese people. Tariff elimination without exception was not a prerequisite to Japan joining the talks, but now Japan is asked to reduce tariffs. Japan is at the risk of selling out its entire agriculture, and we believe the government should immediately withdraw from the negotiations.

The United Nations designated this year as the International Year of Family Farming, with the aim of revitalizing regional agriculture based on family farming and promoting sustainable development of rural communities. The Abe administration is going against this trend by promoting corporate farming and letting private companies use agriculture and rural villages for the purpose of making profits. We are going to take a stand against the Abe administration.

Q. How do you evaluate a series of new agricultural reform policies?

A. Halving the amount of direct payment to rice growers and abolishing it four years later would have a grave impact on farmers. We are not against the idea of introducing a Japanese-style direct payment system focused on multifunctional character of agriculture, but the range of subsidies is too narrow. If the government is going to revise the individual-household income compensation, it should set up price guarantee programs which would enable farmers to continue production, and compensate their incomes in the same way as other industries.

Q. How should the government revise the basic plan for food, agriculture and rural areas?

A. Nowadays, we are not assured that we can get food any time only if we have money. It is important for the government to think of agriculture as the nation’s backbone industry and give the highest policy priority to revitalizing agriculture and improving food self-sufficiency rate. It is also necessary to focus on various types of family farming which coexist with environment and ecosystems, and bear the task of supporting the regional economy and preserving traditions.