In France, a system of collecting fees from hunters to be used to compensate for crop damages caused by deer and wild boars has played a significant role in supporting farmers’ businesses. But the system is facing difficulties due to decline in the number of hunters and increasing amount of compensation brought about by rising prices of agricultural products.

Gregoire Callies, 49, runs a 150-hectare hunting ground in the village of Brignancourt in Val d’Oise, which is located some 40 km northwest of Paris and is known for vast wheat fields which appear in the paintings of Vincent van Gogh and Claude Monet.

Showing a menu for hunters, Callies explained that those who want to hunt in France must pay annual fees ranging from 40 to 400 euros (1 euro is equivalent to roughly JPY 130) to hunting associations. In hunting grounds where serious damage is caused by wild boars, people are asked to pay even more.

Callies charges hunters 500 euros per day, including fees, meals and management costs, and offers a 10-days-in-a-year package at a discount price of 2,800 euros. 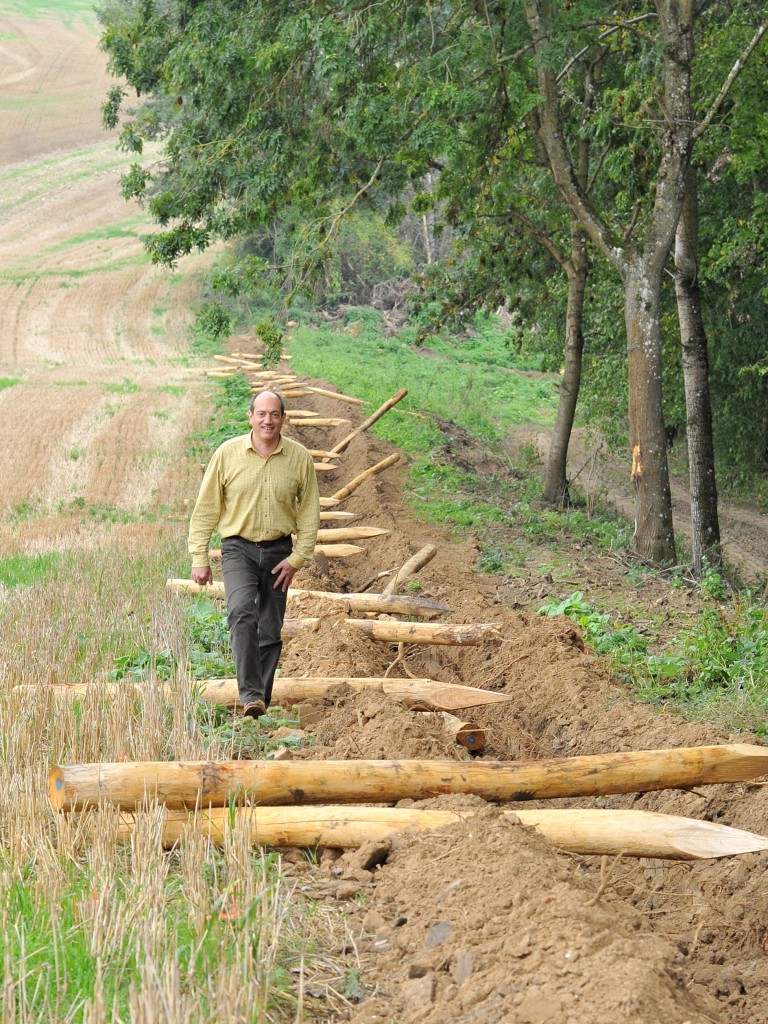 Gregoire Callies prepares to erect a 6-km-long fence along the borders of farmlands to surround a hunting field which he manages in Brignancourt, in Val d’Oise,

The compensation system began in 1970. Until then, farmers were allowed to hunt to avoid damage from wild animals, but in order to protect large animals, the government decided to give hunting permission only to hunters and instead enacted a law to make hunters compensate for the crop damages caused by wildlife.

The amount of compensation is calculated by multiplying the volume of damaged crops by the market prices of farm products which a farmer was supposed to harvest. For instance, if the market price of corn is JPY 20,000 per ton, damage worth 10 tons on a 2 hectares of land will amount to JPY 200,000, which means the producer will receive compensation of JPY 190,000, deduct 5 percent regarded as a natural decrease. Laurent Woltz, an official in charge of legal and financial issues at the National Federation of Agricultural Producers (FNSEA), the largest farmers’ organization in France, highly evaluates the compensation system, saying that it gives farmers a sense of security to concentrate on farming. But at the same time, he points to some problems concerning the system, including moral issues among some managers and hunters.

Since the amount of compensation is calculated based on market prices, farmers who add value to their products through direct sales would suffer losses. Meanwhile, there are many cases where hunting ground managers deliberately increase the number of wild boars by feeding them for the sake of hunters.

Considering that hunting is a hobby just like golf, Woltz expressed concern over the fact that farmers who make a living through agricultural production are disturbed by people engaging in a hobby.

Benoit Guibert, an official in charge of compensation matters at the National Hunters Association, worries that the scheme would fail in the future, as compensation payments are ballooning. The amount of payments increased by 2.5 times in the past 20 years, and a total of JPY 3.7 billion compensation was made to farmers in 2012. Payments amounted to JPY 6.3 billion including costs for damage assessment and damage prevention measures.

The rise in compensation payments is due to higher prices of agricultural products. Guibert says there is an urgent need to strengthen damage prevention measures, such as setting up fences, and foster young hunters.

This fall, Callies employed six people to set up a 6-km-long fence to enclose wild boars and reduce damages on crops. Callies says such measures to manage wildlife would help reduce the large amount of hunting fees and compensation money, enabling farming and hunting to coexist.