Hunting is popular in Europe and the use of gibier (game meats) is well established in the region. But even in European countries where hunting is deeply rooted as a tradition, damages caused by wildlife to agricultural products are becoming increasingly serious. In this series, we look at the situations and concerns in Europe related to hunting and game meats, and what Japan can learn from their experiences.

Marnia Alexander, 57-year-old professional hunter in Bavaria in southern Germany, proudly states that hunters are the ones who suppress threats by wild animals and protect farmlands and forests from devastation. In the region where hunting is the most popular in the country, professional hunters play an indispensable role as forest keepers who prevent wildlife from damaging agricultural products and maintain ecosystem in the forests. 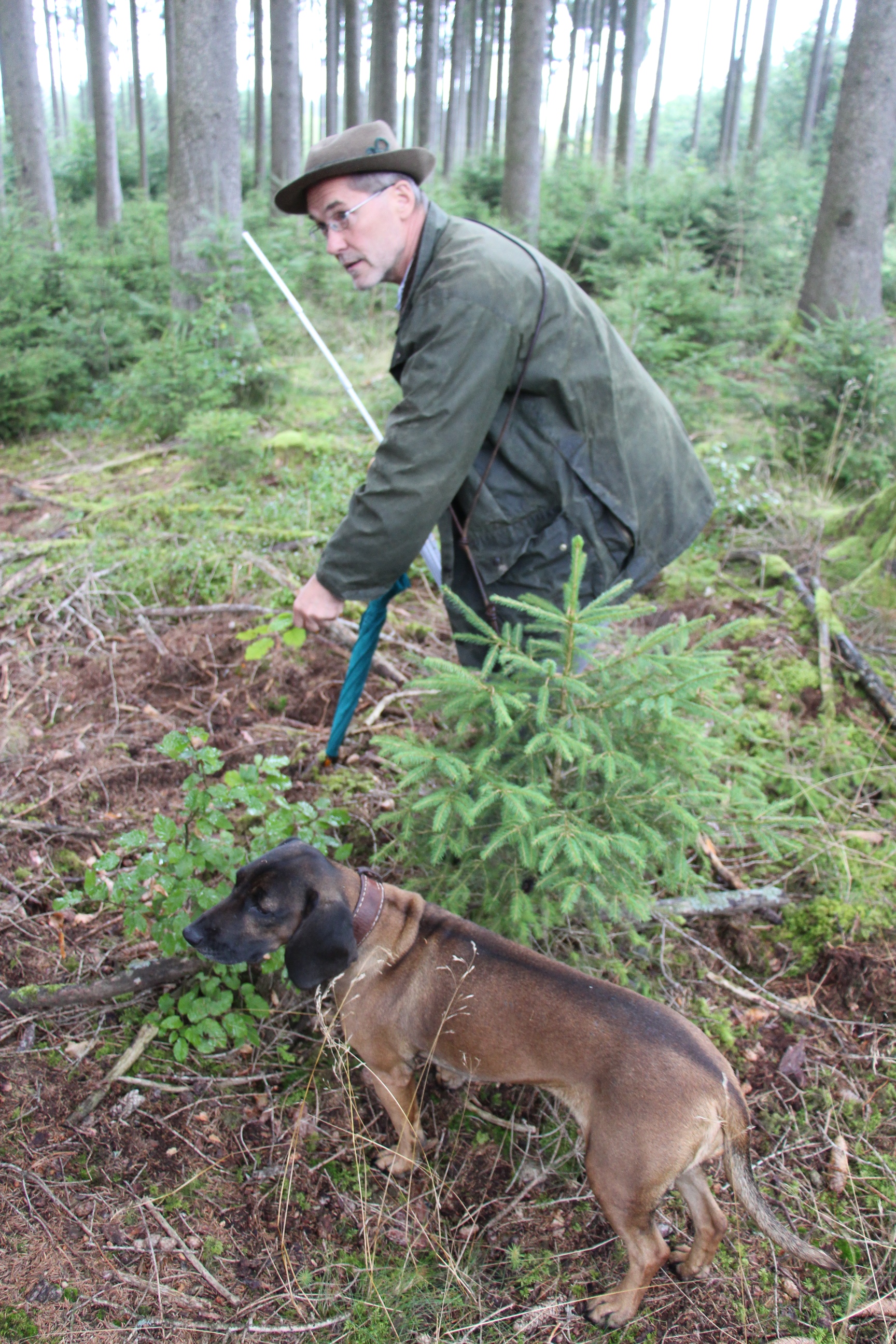 Professional hunter Marnia Alexander inspects damage on trees in Maxhof Nord district of Bayern, in addition to the task of hunting wildlife.

Farmlands and forests are severely damaged by wild animals in recent years, and professional hunters work actively to cope with wildlife. University students who studied forestry become professional hunters and adjust the number of wild animals under management plans they create based on the extent of damage to agricultural products and trees and the estimated number of wild animals. They pay fines to landowners if they cannot meet the targets or when more-than-expected damage is reported.

Alexander, who has been engaging in wildlife management business ever since he was graduated from school, works for Bayerische Staatsforsten, a forestry firm which has made hunting lease agreements with landowners. As one of the professional hunters hired by the firm, Alexander manages 2,067 hectares of state-owned forests in Maxhof Nord district and adjusts the number of some 50 species, including deer and wild boars. His annual income is 60,000 euros (roughly 7.8 million yen), about the same as that of an average company employee.

In Germany, the number of people with a hunting license totaled 350,538 in 2010. This means there are 316 hunters per 10,000 hectares of forest, which is four times that of Japan where the number is 76. Many of them, mainly wealthy people, enjoy hunting as a sport, and the number is increasing slightly every year. Hunting grounds with red deer which have large, good-shaped horns are popular and lease fees are higher.

The company for which Alexander works makes hunting lease agreement with amateur hunters for 600 euros (JPY78,000) and allows them to hunt for nine months from spring to fall. Although the firm’s main business is lumber sales, lease fees are also an important source of revenue along with the income from sales of game meat.

250 people work as professional hunters in Bavaria. Philipp Bahnmueller, spokesman for Bayerische Staatsforsten, says the hunters contribute to controlling deer population especially in alpine regions. The complex landscape geography of the alpine regions in the southern part of Bavaria makes it difficult for amateurs to hunt, letting red deer and roe deer to propagate and give damage to vegetation by eating alpine plants and stripping the bark off trees. Damage to plants in the region which is popular among mountain climbers could give adverse effects to alpine tourism.

Professional hunters support the hunting culture, as well as coping with the problems caused by wildlife. In the three years between 2010 and 2012, Alexander captured 257 deer, 16 percent more than the target of 222. Referring to this year, the first year of the management plan he creates once in every three years, Alexander said he is confident that he can meet the target and avoid paying fines.