Tomato leaf miner detected in Japan for the first time 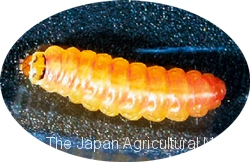 KUMAMOTO, Dec. 1 – The tomato leaf miner, a serious pest of tomatoes and other Solanaceous plants, was detected in Japan for the first time in Kumamoto Prefecture in November.

The insect, a species of leaf eating moth, is referred to as “tomato Ebola” in some countries because of the severe damage it causes to crops, threatening tomato production worldwide.

Farmers must take pest control measures to detect it quickly and prevent an outbreak in Japan. 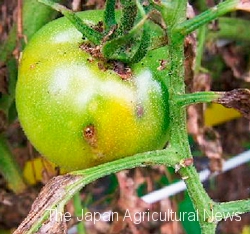 The pest, which originates from South America, has been detected in at least 80 countries.

After it invaded Spain in 2006, it spread quickly to Europe, Africa, Southeast Asia, Taiwan and China.

It has a high reproduction capacity and its larvae feed on tomato fruit, burrowing into the fruit and creating holes of a few millimeters on the surface, resulting in deformities and rotting.

According to foreign media reports, Kenya suffered tomato crop losses of 114,000 tons in a season in 2018, translating to $59.3 million (6.4 billion yen) in economic losses. In Nigeria, a state of emergency was declared in 2016 after tomato fields were destroyed, with Nigerian farmers describing the outbreak as tomato Ebola. 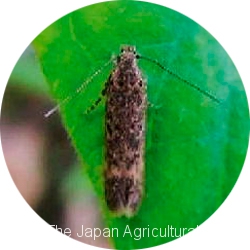 It is yet unclear how the pest got into Kumamoto.

The National Agriculture and Food Research Organization’s division for pest control research cites the possibility of the insect flown from overseas by a strong air current or attached to a plant or a material shipped from outside Japan.

The Ministry of Agriculture, Forestry and Fisheries is continuing investigation around the area where the pest was discovered.

To prevent crop damages and outbreaks, it is important for farmers to detect the insect quickly by knowing how it looks like and how it damages plants.

Larvae are light pink with a belt-like black pattern around the head. They eventually grow to about 8 mm in length.

They can survive at a minimum temperature of 8 degrees Celsius and there are reports that they made it through the winter in the form of eggs, in the pupal stage and as adults.

Damaged plants and fruits must be removed from the cultivation area and should be either buried deep in soil or discarded after killing the insect by sealing it in a plastic bag.

In other countries, there are cases of controlling the pest using insecticides or predatory bugs such as the tobacco leaf bug.