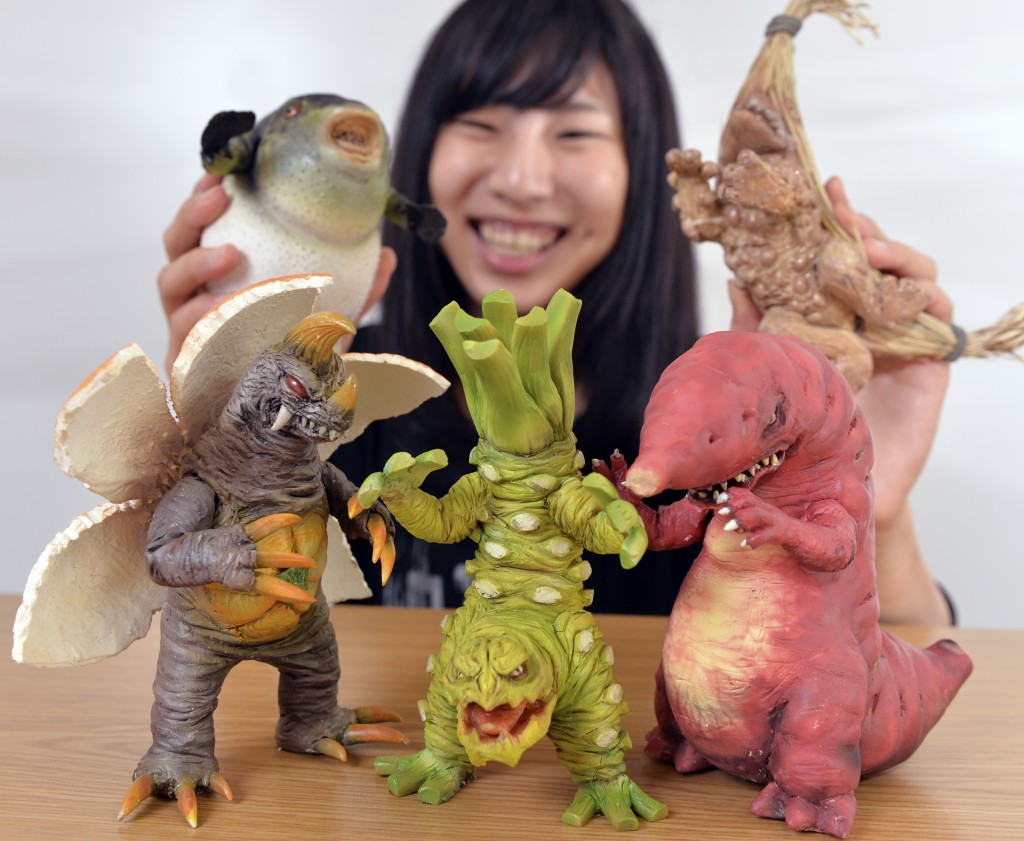 Figures of “local monsters” designed based on local agricultural specialties. Front row (from left to right): Mikagerasu based on mandarin orange (mikan), Twoon based on horse radish (wasabi with “twoon” pungency), and Imorasu based on sweet potato (satsumaimo). (in Chiyoda-ku, Tokyo)

Kazuhiro Eguchi “Local monsters” designed based on local specialties including agricultural products are drawing attentions as new tools for regional promotion. They are a little different from cute local mascot characters (yuru-chara) in how they leave strong impression. The whole project is produced by Dai-Ichi Tsushinsha Inc., an advertising company headquartered in Tokyo, and Hiroshi Sagae, a master art director of special effects films particularly known for his work on the monster film “Gamera.” So far, they already created two dimensional images of 49 monsters and three dimensional models for 23 monsters among them, each inhabits in 46 different prefectures. Several monsters use agricultural products as motif. For example, Twoon from Shizuoka Prefecture is a horse radish monster, Mikagerasu from Ehime Prefecture is a mandarin orange (mikan) monster and Momomon from Yamanashi Prefecture is a peach (momo) monster. Some local governments have decided to use them in their promotional activities. Four cities already cooperate with the firm in producing monster figures. Uonuma City Tourist Association of Niigata Prefecture has a plan to adopt them in their local promotional activities this autumn. Sojiro Uchino, executive producer of Dai-Ichi Tsushinsha, said, “We hope this local movement will help give courage to Japan. We’ll make songs, special effects films to make them more popular and famous in a wide variety of settings.” (Sept. 2, 2015)