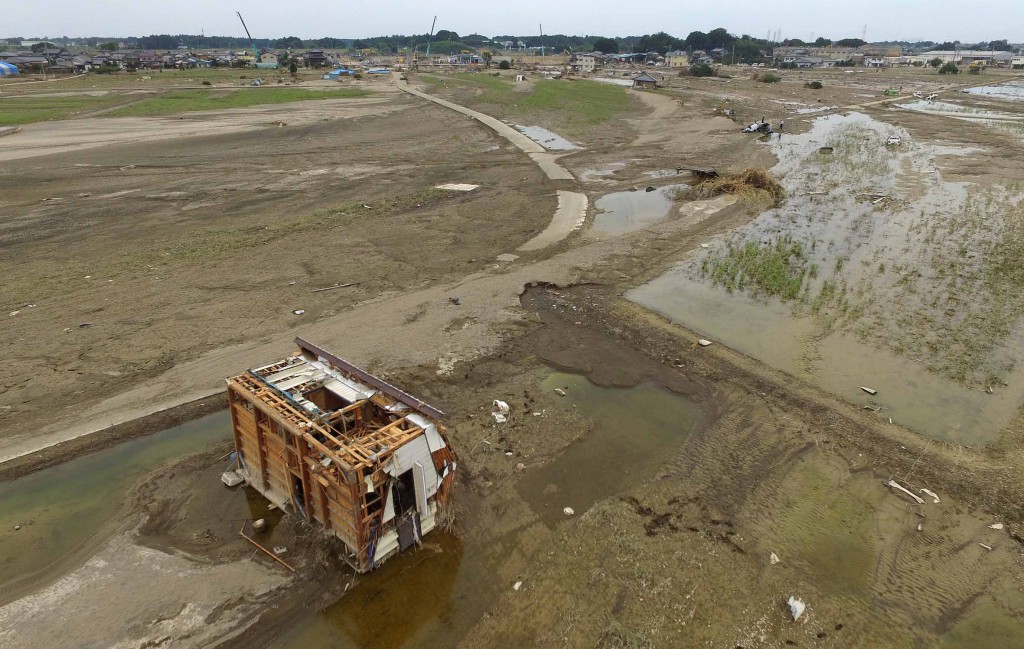 A house lies on its side on a farmland on Wednesday, Sept. 16, in Joso, Ibaraki Prefecture, after being swept away by the flood caused by the collapse of the Kinugawa River banks a week before. Damaged houses and vehicles are left on farm fields covered with mud, while numerous crane trucks are lined up along the riverbank to reconstruct the levee.

A farmer of Joso, Ibaraki Prefecture, severely hit by the heavy rain and floods which occurred a week ago, is at a loss of how to recover his business. His rice paddies, farming equipment and harvested rice had all been submerged in muddy water, making it impossible to deliver the produce to customers.

Isamu Wada, 64, grows rice on a 60-hectare land in the city’s Ono district, out of which 55 is rented. 35 hectares were yet to be harvested when the banks of the Kinugawa River collapsed on Thursday, Sept. 10. Muddy streams flew into the district located east of the river, damaging all the rice paddies.

The water rose as high as 2 meters, completely flooding 640 hyo (1 hyo is 60 kg) of un-milled rice that Wada had harvested and kept in a dump truck and a storage house. Wada was planning to deliver the rice to some 40 landowners later in the month, but he can no longer do so.

Since the flood hit rice farms in the midst of the harvesting season, many farmers had their rice which was stored for inspection soaked in water, according toKazumi Sakamaki, an official in charge of grains at JA Joso Hikari, a farm co-op serving the area. However, agricultural insurance schemes only compensate rice farmers for crop damage before harvest and not for damage to harvested produce. “In order to help farmers resume their operation, it is necessary to find a way to cover damage on rice caused between harvest and inspection,” Sakamaki said.

“I wish harvested rice would become subject to agricultural insurance,” Wada said. “The government’s goal of improving farmers’ income is a dream that never comes true. It is difficult even to maintain our current business.”

As for Wada, all of his farming equipment — six grain dryers, three dump trucks, two forklifts, a rice husker, a color sorter, three tractors, a power shovel and two combine harvesters – were also submerged under water. He says not all of them are covered by insurance, which means he needs to get a loan of more than 100 million yen to resume his business.

“I have to clean up, but I don’t have the slightest idea where to start from,” Wada said. “I’m filled with worry.”

While some rice farmers in the district had given up farming last year amid the trend of declining rice prices, Wada expanded his acreage by 5 hectares this year by renting land from the farmland consolidation bank. To diversify the risk of price falls, he uses 7 hectares of land to grow rice for livestock feed. However, he is in no condition to make his planting schemes for next year. 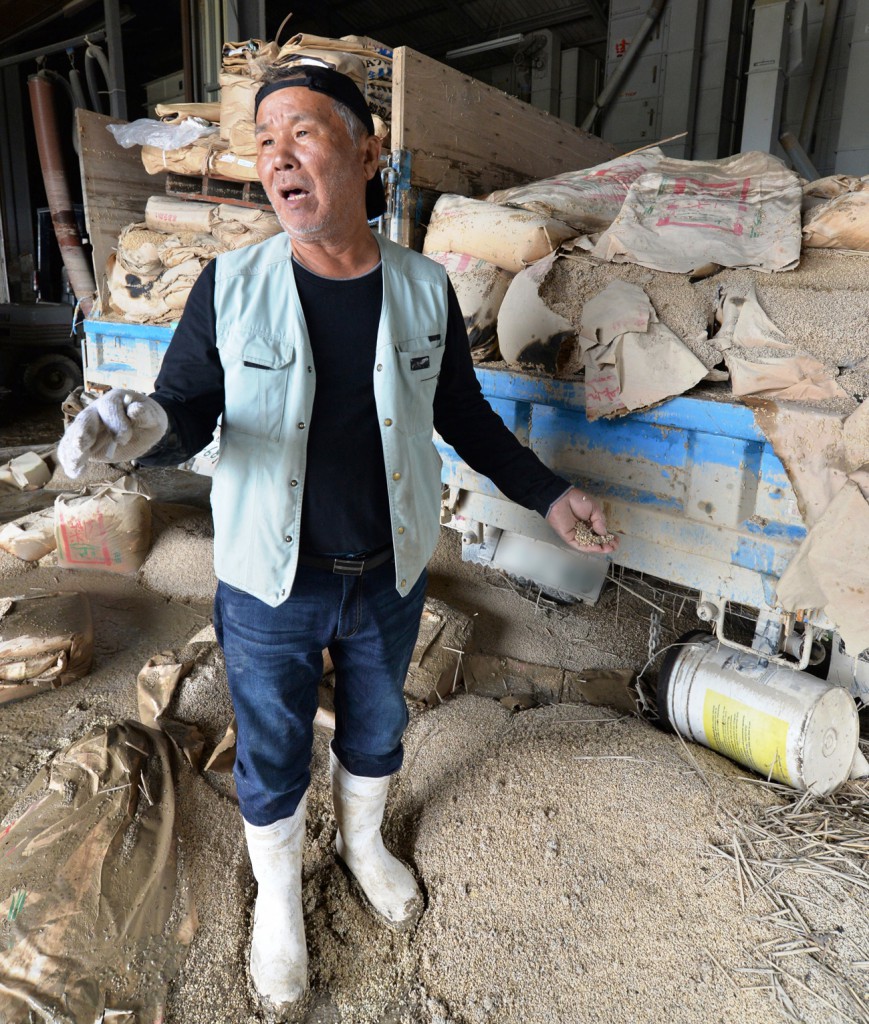 Isamu Wada shows bags of unmilled rice stored in his farm in Joso, Ibaraki Prefecture, on Wednesday, Sept. 16. The bags were soaked in muddy water as the flood hit the district. The Japan Agricultural News blurred the car number plate in this photo for privacy reasons