Prices of skim milk powder — indispensable ingredient for calf feeding – have risen to a record high, becoming a serious concern for the wagyu cattle production industry. As market prices are predicted to remain high in the future, it may become difficult for the industry to meet the government’s goal of increasing wagyu production.

According to the farm ministry’s agriculture price index, the price of skim milk powder for livestock feed stayed at around JPY10,000 per 20 kg since the end of 2013, nearly twice as much compared with a decade ago. Although the price dropped slightly in the recent months, it is still 20 percent higher than five years ago. The trend is expected to continue in a medium to long term along with the rise in global human population.

The rising prices are having a grave impact over calf feeding, as most producers now depend on milk replacers — mainly skim milk powder mixed with hot water — instead of letting calves feed from their mothers, for the sake of improving breeding efficiency.

The situation has become a headache also for primary agricultural co-ops (JAs) which operate facilities to raise calves. Recently, an increasing number of beef cattle producers and dairy farmers are entering the profitable business of wagyu cattle production, and because they do not have expertise in raising wagyu calves, many of them entrust their calves to JAs.

Ballooning feed expenses for calves, rising by several million yen in some cases, are hitting hard on the JAs, especially those operating on a large scale, which had been working to cut costs by adopting efficient use of cowsheds and labor-saving equipment. 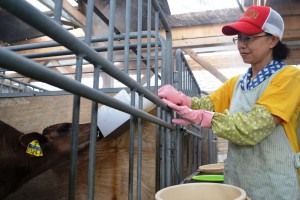 JA Karatsu Cattle Station, a farm co-op facility in Karatsu, Shiga Prefecture, regularly takes care of more than 500 calves, out of which 70 percent are about a week old. Such calves are fed milk replacer for roughly three months, and the cattle station uses more than 30 tons of skim milk powder every year to feed them. The station’s annual cost for skim milk powder alone rose by some JPY3 million, but the station officials say they cannot reduce the amount because it could harm the calves’ growth.

Because there is no program to compensate for the steep increase in skim milk powder prices, calf producers have to cover all the expenses caused by rising prices. If the calf raising business faces difficulties, it would become hard to meet the government’s annual wagyu beef cattle production target of 2.52 million by 2025.

Toshiaki Mimasaka, head of the cattle station in Saga, called for the need to establish a compensation system for buyers of skim milk powder, saying that there is currently no measure calf producers can take other than improving feeding efficiency.