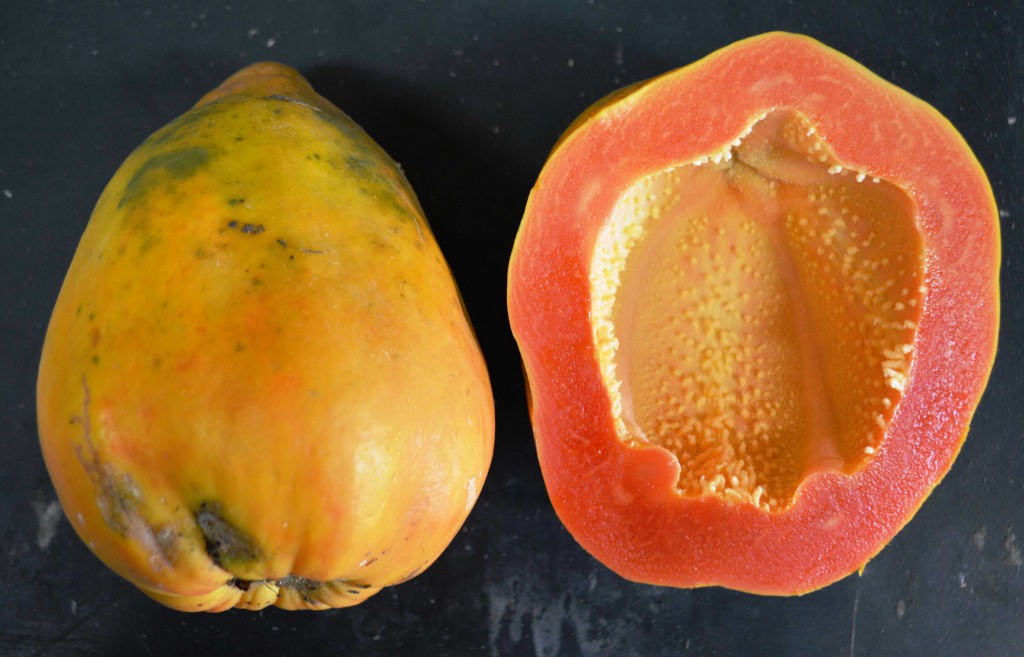 Ishigaki Sango papaya is seedless and has a hollow core

Ishigaki Sango, a seedless papaya variety grown in the town of Kikai, Kagoshima Prefecture, is attracting repeat customers due to their sweetness and large size, although the yields are still small. The brand, which was developed by Japan International Research Center for Agricultural Sciences, is cultivated by Tsuyoshi Yoshioka, 64, on a 15-are land. The papayas are produced only on a small scale since the young plants are propagated using a tissue culture technology and thus are costly, but the fruit is proving popular, as it has a high sugar content of around 13 degrees Brix and sometimes weighs more than 1 kg. The new papaya variety was registered in 2008 after being selected from naturally crossed seedlings of Wonder Bright variety. Because it is parthenocarpic, the fruits are seedless. According to the data compiled by the center’s Tropical Agriculture Research Front in Ishigaki Island in Okinawa Prefecture, the average fruit weight is 840 g and the average sugar content is 13.8 degrees Brix. The skin color is vivid orange and the flesh is bright reddish orange. In 2011, Yoshioka purchased 200 young plants on the center’s advice and cultivated them inside a carvel-built facility with wooden pillars and windbreak nets. He puts on sale the ones which weigh more than 1 kg, selling 300 to 400 of them annually as fruits, at JPY500 each. He sometimes sells them as vegetables at a public wholesale market in Amami Oshima Island in Kagoshima at the same price as other papaya brands. He tried marketing them at fruit and vegetable markets in the mainland, but was refused because of lack of demand for papayas of such a large size. But he said large papayas are popular among some people who buys them as gifts. The ceiling of Yoshioka’s facility is 2.6 meters high, so when the trees grow too tall, he cuts back the roots by half and pulls the trees down. Since the trees suffered anthrax, he is considering covering the trees against rain, because he doesn’t use agricultural chemicals. The center allows Futaba Shubyo Oroshibu, a seed dealer in Nanjo, Okinawa Prefecture, to ship 5,000 young plants of Ishigaki Sango annually. Although the plants are priced at JPY1,300 each, higher than other brands, the shipments are gradually increasing, according to the firm. “We hope producers will ship them as fruits rather than as vegetables, because their flesh is sweet and juicy,” a firm official said. “They are characterized as having short internodes and bearing fruit at low nodes. When the trees grow tall, you can cut them to a height of about a meter, and then side shoots will come out.” 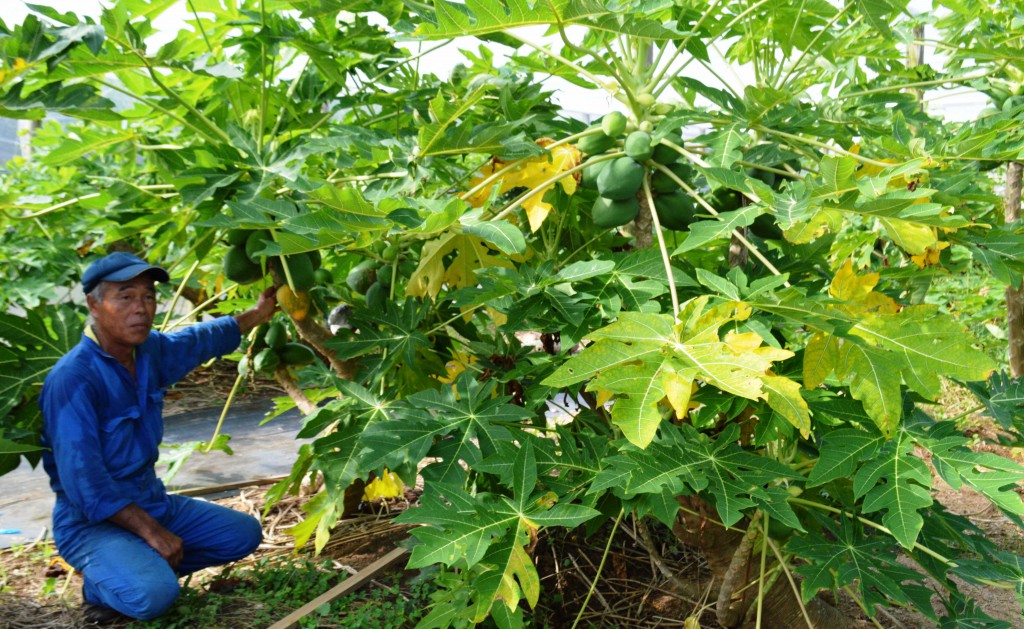