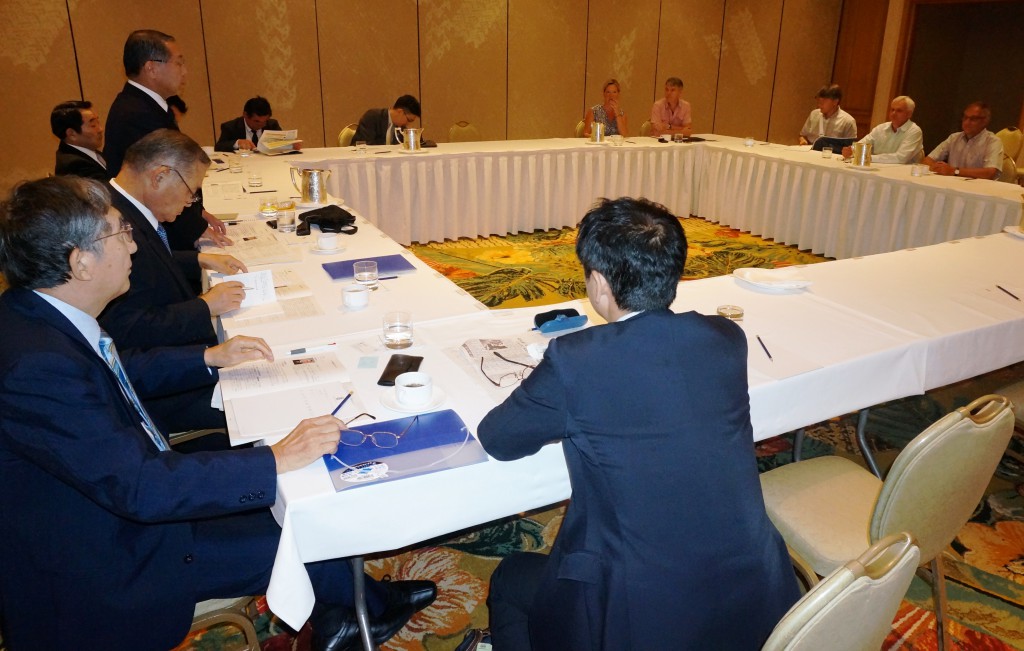 Japanese and Canadian delegation of farmers’ representatives exchange opinions on the ongoing multilateral free-trade talks in Hawaii on Wednesday, July 29.

Officials of the Japan Agricultural Co-operatives group met Canadian representatives of the farm sector in Hawaii on Wednesday, July 29 (July 30 Japan time), and agreed to push their governments to protect sensitive farm products in the ongoing ministerial sessions under the Trans-Pacific Partnership free-trade talks.

As frustration rises over Canada which has been stonewalling demands from others to open its markets, officials of the Canadian dairy, poultry and egg industries which are protected under the government’s supply management system claimed it is important for the Canadian government to keep its protective policies in the run-up to the general elections in October.

Toshiaki Tobita, vice president of the Central Union of Agricultural Co-operatives (JA-Zenchu), said the negotiations have entered a critical stage, stressing that the governments should seek a realistic agreement which takes into account sensitivities of each member nation. He said they will keep on urging the government to maintain the Diet resolution calling for protection of key agricultural products.

Wally Smith, President of the Dairy Farmers of Canada, said the upcoming elections are working to their advantage, as the government is reluctant to make concessions regarding supply managed commodities in fear of losing farmers’ support. It is difficult for Canada to compromise and open its dairy market, also because of long-standing sovereignty movement in Quebec, the major dairy farming region with a large French-speaking population. Still, Smith said they will continue calling for protection of supply managed commodities, as the situation changes minute by minute.

The JA group’s delegation also met Peter Clark, one of Canada’s leading international trade strategists, who warned that agricultural negotiations could progress any time, pointing out the possibility of the United States trying to conclude the first stage of the talks by shelving more difficult issues such as intellectual property.