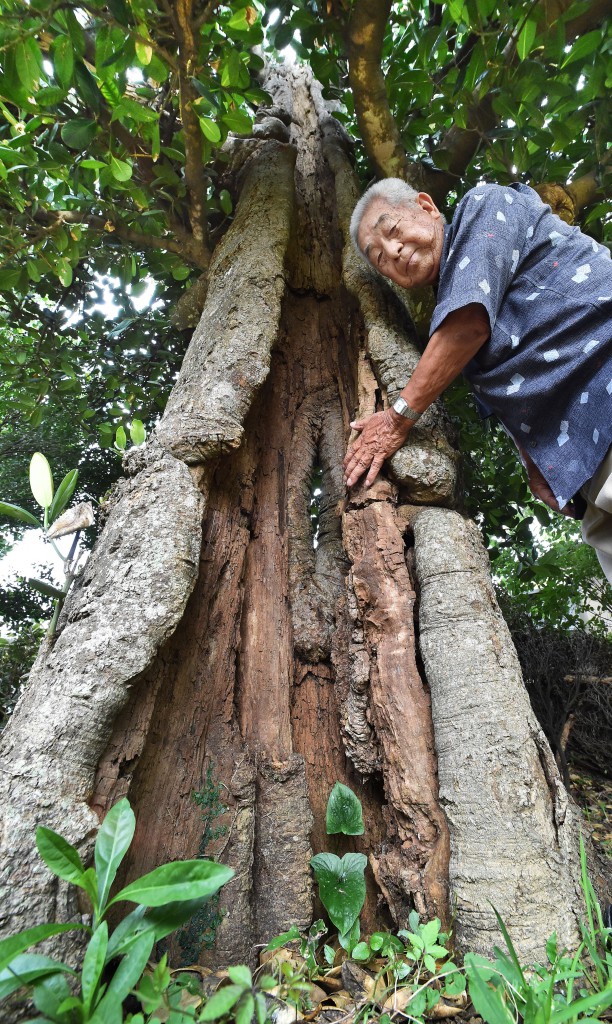 Inami putting gentle hand on hollow of war-wounded garcinia. The tree is estimated to be over 300 years old (in Yomitan Village, Okinawa Prefecture)

In Furugen area in Yomitan Village, Okinawa Prefecture, there is a gigantic leafy garcinia tree with a hollow trunk. It survived the battle of Okinawa and stood in the shrine of Furugen Ugwan where local villagers come to pray for huge harvest.

Furugen used to be agriculturally successful as a producer of lily bulbs for exports and other products in the early Showa period.

It was toward the end of the Pacific War when the US troops landed the Okinawa islands. The major ground battles started in April 1945 and Okinawa was burned down. The tree was also damaged by fire during the war.

Hiroyasu Inami, 87, was born and brought up in Furugen. When he was a student of a prefectural school of agriculture and forestry back in 1945, he had no chance to study but was forced to render service to the Japanese Army.

Then in the northern part of the Okinawa mainland, he was captured by US soldiers and forced to live a hard life as a prisoner of the war camp. “Malaria was spreading. I never ate enough or slept enough. I could die at any moment but survived,” he recalls.

After the war, the area became the part of US military bases and the villagers lost everything from the farm land to the Ugwan. When the land was returned in 1977, the villagers found the war-wounded garcinia tree in the shrine.

“This tree is one of a few surviving witnesses of the war in Okinawa. It speaks of the pains inflicted by the battle. I hope it can keep conveying the message to younger generations that the war is cruel,” he said and gently put his hand on the trunk.