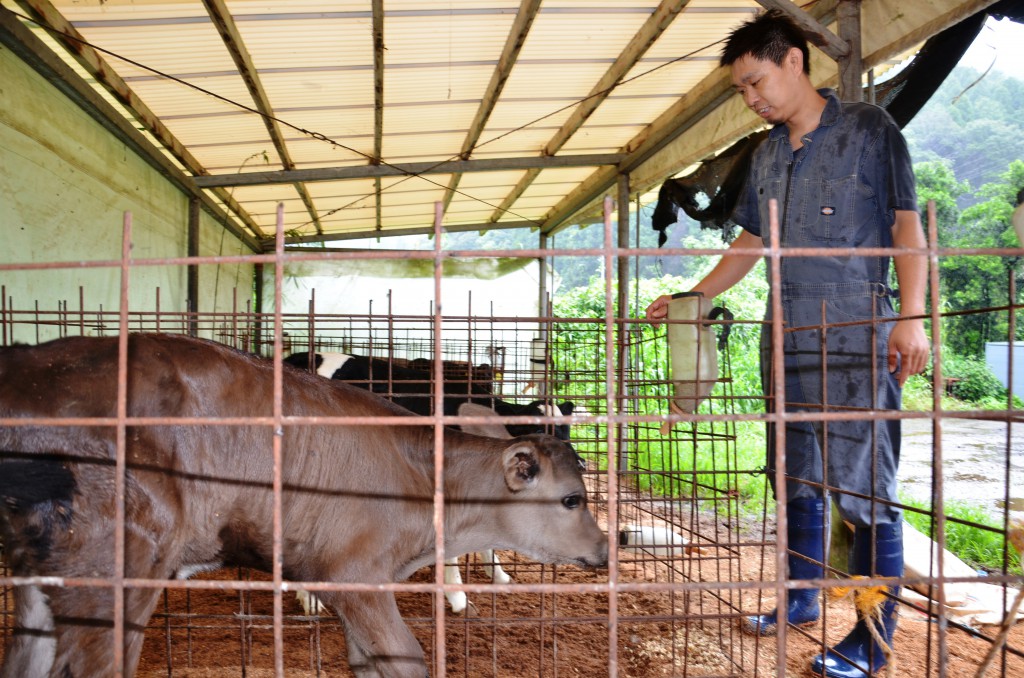 A dairy farmer of Kagoshima takes care of an F1 calf born by crossbreeding dairy cattle and Japanese Black beef cattle. Many dairy farmers are increasing the number of F1 cattle which are more profitable.

More than 30 percent of dairy cows which underwent artificial insemination in 2014 were crossbred with Japanese Black wagyu beef cattle to produce F1 breed calves for beef production, according to statistics by the Animal Inseminators’ Association of Japan. The percentage is the third highest since the association began compiling the data in 1995. The ratio for Hokkaido, the major dairy production area, topped 20 percent, marking a record high. The increase reflects dairy farmers’ effort to expand shipments of beef calves which are priced higher than dairy calves to cope with rising costs which squeeze their profits. This means the number of births of dairy calves will decline, and the association warns of possible drop in the nation’s raw milk production in three years, considering the life cycle of dairy cattle.

The data shows that the national average of the percentage of dairy cows inseminated with the semen of Japanese Black cattle – the major wagyu beef cattle – was 33.6 percent in 2014, up 3.5 percentage points from a year before. As for Hokkaido, the ratio was 20.4 percent, up 2.3 percentage points from a year before and higher than the previous record of 20.1 percent in 2006. Both figures rose for three consecutive years. The number of such cows totaled 333,095 nationwide, with Hokkaido occupying 80 percent with 212,536. Such cows amounted to 120,559 in areas other than Hokkaido, with the ratio marking 48.4 percent, second highest after 51.4 percent marked in 1998.

By region, the ratio of such cows exceeded 50 percent in all areas except for the Tohoku region, with the highest marked in the Chugoku and Shikoku region at 60.6 percent.

Dairy heifers born from cows inseminated in 2014 go through pregnancy and become ready for milking in 2017, and the data indicates there is a risk of the number of such cows declining.

“It will become a heavy burden for future raw milk production,” said an official of the dairy division of Hokuren, an agricultural co-operative union in Hokkaido. “In order to maintain the production volume, we have to raise and manage the limited number of milk cows carefully to make full use of them.”

Raw milk production is already declining, failing to meet market demand. Dairy industry is in need of more milk cows, but industry officials say the situation of many beef calves being born from dairy cows has not changed. As dairy farmers are suffering from rising costs of imported feed due to weaker yen, they are trying to maintain their business by making profits from sales of beef calves which are marketed at higher prices than dairy calves.

In Kagoshima Prefecture, the volume of raw milk production marked a year-on-year rise in May, as the number of delivered cows which can be milked increased compared with last year. However, in fiscal 2014, more than half of semen demanded by dairy farmers for inseminating their cows were those of Japanese Black cattle, reversing the trend from the previous year when farmers wanted more semen of dairy cattle than those of beef cattle.

Arimura Farmers, a firm which manages 160 cows and calves in Kagoshima, is increasing shipment of F1 cattle, a crossbreed of dairy cattle and Japanese Black cattle, in recent years. It is also increasing the number of purebred Japanese Black cattle, which are priced even higher, by embryo transplanting. This year, the firm expects to ship 10 to 20 more beef cattle compared with last year.

“As a dairy farmer, I have doubts about having to depend on sales of products other than raw milk,” says Yohei Arimura, 38, one of the firm’s co-onwers. “(But) costs of feed rose about 30 percent compared with three years ago. We have difficulty managing business under current milk prices and the only choice we can make is to increase beef cattle.”