【News】 Green tea consumption soars after reports on its effects to reduce mortality risk (May 14, 2015) 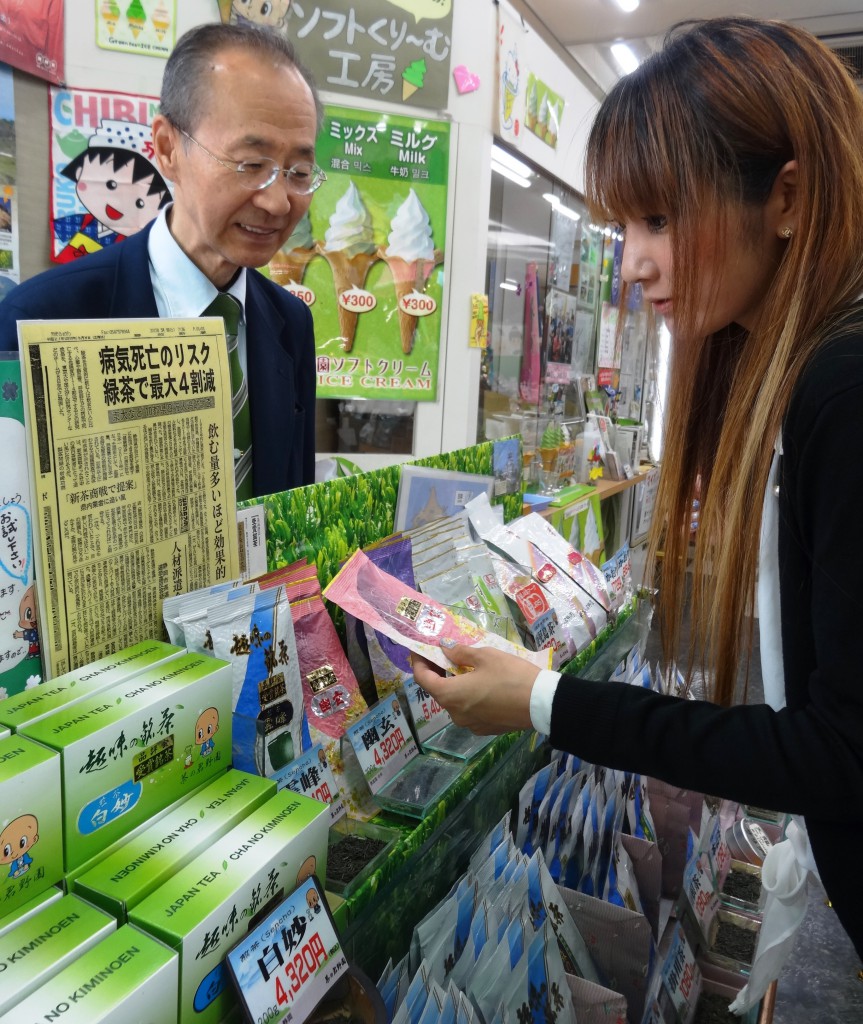 A young woman looks at a package of green tea leaves at a tea store in Tokyo’s Taito Ward.

More people are buying green tea leaves after an announcement by a team of researchers from the National Cancer Center and other institutions that those who drink green tea daily have less risk of dying from cerebral vascular and respiratory diseases compared with those who barely drink the beverage. The number of health-conscious customers increased sharply at stores in Tokyo, and dealers and promoters of green tea hope to make use of the chance to revive the popularity of green tea.

Cha no Kiminoen, an established tea store in Ameya Yokocho market street in Tokyo’s Taito Ward, is receiving new customers after the release of the research results. Many young people started coming, in addition to elderly people and foreign tourists who regularly visit the shop.

The store displayed a copy of a newspaper article with a headline saying green tea reduces the risk of death from illness by a maximum of 40 percent. A couple in their 20s was buying green tea leaves, saying that they saw on TV the day before that it is good to prevent diseases.

Kiminoen Inc. President Shintaro Kimino says he is happy to see the increased popularity in green tea leaves at a time when the newly-picked tea is on sale, as he had seen continued decline in green tea consumption.

Inageya Co. of Tachikawa, Tokyo, which operates a supermarket chain in the metropolitan area, says its sales of green tea leaves soared since the announcement was made on Thursday, May 7. The amount of daily sales rose by a maximum of 30 percent from the previous year and continues to post an average of more than a 20 percent year-on-year increase, according to the firm. Inageya spokesman said it is very rare for green tea sales to show such a rise.

Green tea market dealers are also paying great attention to the trend of increasing sales. An official of the tea wholesale market in Kagoshima Prefecture said dealers expect the news would boost deals for the second-picked tea.

According to the research, people who drink more than five cups of green tea have less risk of dying from diseases compared with those who drink less than a cup. “(Five cups) are just the right amount if you make it a custom to drink green tea after every meal,” says Yoko Mitsuki who established in April an association to promote green tea among young people and protect Japanese tea culture. “I hope this will become an opportunity for the custom of drinking green tea to take root again,” Mitsuki said.