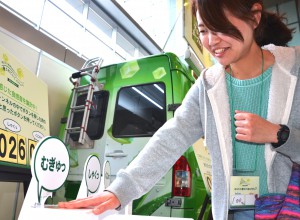 A woman participates in Morinaga Milk Industry Co.’s voting event held in Tokyo Midtown in Tokyo’s Roppongi district to choose the most appropriate onomatopoeic term to describe the mouthfeel of a yogurt product.

“Pari,” (crisp) “puchi” (pop) and “saku saku” (crunch)  – these are some of the onomatopoeia, or words that imitate sounds, that Japanese food manufacturers recently highlight to advertise the mouthfeel of their products. More and more food makers are making use of a rich vocabulary of onomatopoeia in the Japanese language to attract new customers and boost sales of their existing lineup of items.

Companies are introducing unique campaigns, such as asking consumers to taste their product and vote on what they think is the most appropriate term to express its mouthfeel, or offering recipes which make the most of their products’ texture.

Tokyo-based Morinaga Milk Industry Co. is conducting a new promotional campaign this year for one of its top-selling product “Morinaga Aloe Yogurt.” Starting in Tokyo in April, the company is asking consumers to taste the product and choose the most suitable word to describe its texture from three onomatopoeic words – “kunyu,” (mushy) “mugyu” (squishy) and “shaku” (crispy). The voting event will also be held in major cities in Hokkaido, Aichi and other prefectures.

Morinaga came up with the idea after conducting a questionnaire on consumers to ask them why they like the product, allowing them to give multiple responses. According to the results, 90 percent, the largest number of respondents, said they like the texture of aloe, followed by 74 percent who answered they like the taste. Morinaga officials in charge of product marketing said they learned from the survey that food products “can be enjoyed not only by the tongue but also by the teeth.”

Although unpolished brown rice is known to have many health benefits, many consumers have the image that it has a dry, granular texture, as brown rice tend to turn out undercooked in the center of the grain depending on the way it is boiled.

By developing a brown rice product with a plumpy texture and stressing the characteristic in naming it, the company says consumers started to buy the product repeatedly.

Other companies are trying to appeal to consumers by suggesting ways to enjoy the mouthfeel of their products.

NH Foods Ltd., an Osaka-based maker of hams and sausages, started offering a hot dog named “Pari! Jan Dog” at its new store which opened in Osaka in April. The name is a play on words, combining an onomatopoeia “pari” (crispy) used to describe the crispy texture of the company’s popular Schauessen sausages and Parisien, a French bread.

Calbee, Inc., the nation’s top manufacturer of snacks, introduced a new recipe for its cereal at its breakfast cooking class held in Tokyo in April. Instead of eating cereal with milk, it suggested putting it on a slice of bread or a muffin and toasting it to enjoy the crunchiness.

Calbee says the company is focusing on the biting sounds, such as “saku saku” (crunch crunch) and “kari kari” (munch munch). “We believe the Japanese way of enjoying the mouthfeel can be understood worldwide,” said Calbee’s Chairman and CEO Akira Matsumoto. “We hope to operate overseas based on our success in Japan. We will aim at becoming the best in the world in terms of mouthfeel.”

This entry was posted in Food & Agriculture, Others and tagged News. Bookmark the permalink.