A research team of Mie University Graduate School of Bioresources, headed by Professor Hiroshi Tamaru, has developed a technology to turn tangerines into biobutanol, which can be used as a substitute for gasoline.

Compared with ethanol, which is a widely-used alternative energy produced from biomass, butanol has higher energy output. It is also less corrosive than ethanol so there should be fewer problems using existing storage and handling infrastructure for gasoline.

The fuel is created by putting damaged or rotten tangerines which have become unsuitable for sale into a tank unskinned, along with microorganisms. After cells are broken up to achieve saccharification, different kinds of microbes are added for the fermentation process to form fuel containing 70 percent butanol. 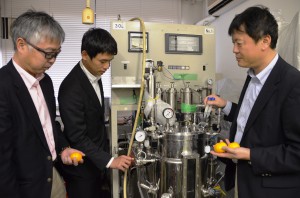 Through experiments, the team managed to make 20 ml of butanol from 3 kg of strained lees of tangerines. The process can be completed in 10 days if it is conducted in an environment of 37 degrees, but it will take longer under lower temperatures.

The research was prompted by concerns over dumping of tangerines in the town of Mihama, Mie Prefecture, which promotes itself as “a town which harvests tangerines all year round.” According to Mihama town officials, annual production of tangerines, sweet Watson pomelos and Seminole oranges in the southern part of the prefecture, including Mihama, Kumano and Kiho, amount to roughly 10,000 tons. Out of that, some 300 tons are disposed of in the selection process as unsuitable for sale, they say, estimating that the unconsumed fruits can be turned into some 300 liters of fuel. More fuel can be created if fruits which are thinned out or not shipped by farms are also used.

In July, a venture firm EcoBioful Co. was established, with Junji Yoshii, Mie University Associate Professor and a member of the research team, serving as Chief Executive Officer. The firm plans to experiment butanol production in a 100-liter tank, and eventually launch a movable plant by loading on a trailer a fermentation tank with a capacity of 600 liters.

In addition to tangerines, the firm plans to use other organic matters, such as rice straw, sweet potatoes and used paper, excluding wood, to create biomass fuel. Water is the only by-product of butanol, which means the process will not cause any damage to the environment. The team will aim at applying the technology for practical use to produce biomass energy which will not increase carbon dioxide emissions that leads to global warming. “The places where agriculture is thriving are also rich in resources for biomass fuel,” Tamaru says. “We are happy if the technology contributes to regional revitalization.”