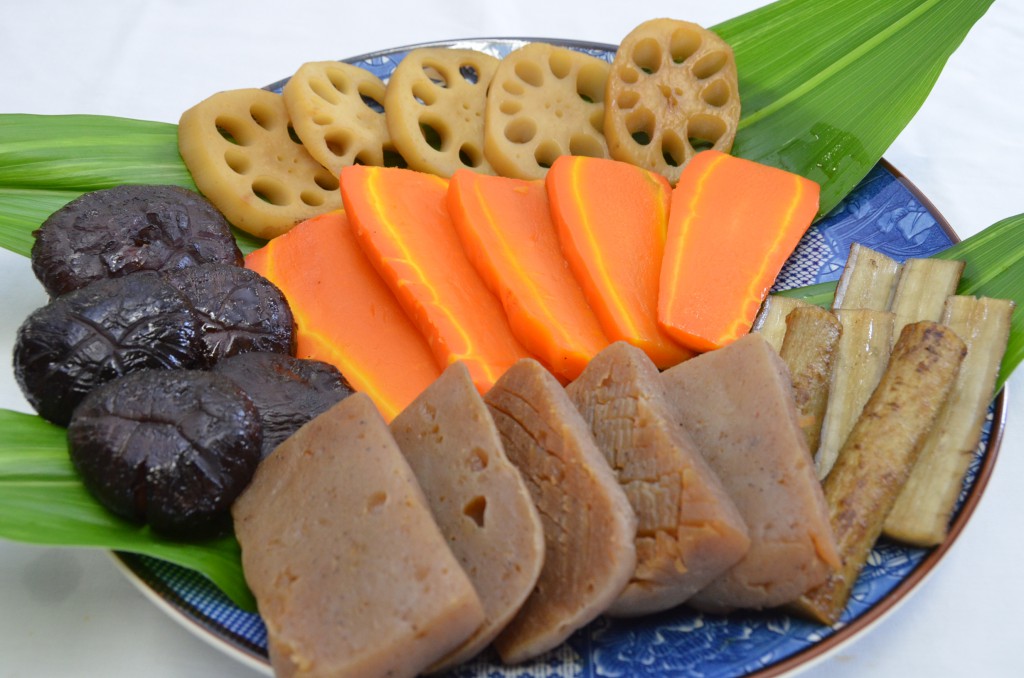 “Ohira” is local cuisine in Shizuoka Prefecture served particularly at gatherings such as Buddhist memorial services. It’s a dish mainly with simmered root vegetables which are cut in large pieces to minimize the loss of nutrients. They also look gorgeous on the plate this way. Japanese home cooks make Ohira by cooking each vegetable separately in stock that is prepared for each vegetable using different combination of seasonings. The name Ohira came from how they serve the vegetables on large (ohkii) flat plates (hirazara). Everything except carrots is cooked in salty-sweet taste basically using soy sauce while carrots are cooked using no soy sauce to keep their bright color. As Shizuoka is famous for Asahata lotus root, which is one of the favorite foods of Shogun Ieyasu Tokugawa, the dish always includes simmered lotus root. 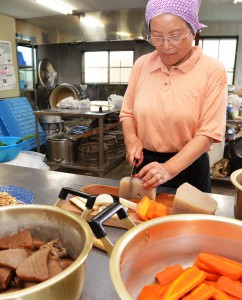 Ohira is originally a dish prepared for nightlong Buddhist fertility rites called “Ohimachi”, which means “waits for rise of the sun” in Japanese. It’s been told that the ingredients are cut in large pieces also to make it easier to serve to a large number of people on busy days. Satsuko Ira, 75, a chief of Shizuoka Chiyoda Branch of Japan Agricultural Cooperatives’ Women’s Group, said, “the dish is strongly seasoned so that it tastes good when eaten cold. We make it extra-sweet so that it can heal tired bodies.” Ingredients may vary from season to season. For example, the dish may have bamboo shoots instead of burdocks. However, it basically has five ingredients as the plate is prepared to pray for the productiveness of five staple grains. When the dish is served on celebratory occasions, people may add simmered fried bean curd cakes with vegetables and kelp to make it seven. Serving every ingredient in odd numbers on the plate is also one of the traditions. When it is served on Buddhist services, however, they are served in even numbers.