27 years after the Chernobyl nuclear disaster in Ukraine, radioactive cesium exceeding the limits set by the European Union is still detected from wild boars captured in the state of Bavaria, Germany, some 1,500 km west-southwest of the nuclear plant.

The EU sets a maximum limit for cesium in game meat of 600 becquerels per kilogram. Germany legally approves game meat trading by individuals, but after the nuclear disaster, it banned under the Atomic Energy Act sales of game meat which exceeds the limit for cesium. It obligated hunters to incinerate such game meat with compensation from the federal and local governments.

There are 112 public or privately-run inspection centers in Bavaria which boasts the largest number of wildlife captures in the nation. Bayerische Staatsforsten (the Bavaria State Forest Enterprise), a Regensburg-based forestry firm, has its inspection center in Munich. Wilhelm Seerieder, head of the company’s Munich office, says the compensation program helps hunters manage the number of wild boars and reduce crop damages.

Around 400,000 to 600,000 wild boars are captured in Germany every year. The number of captures declined after the nuclear crisis, but it began to rise again along with the increase of boar population.

Food products are subject to compensation under the Atomic Energy Act, and game meat was added to the list after it was found out that wild animals and forests, as well as agricultural products, are radioactively contaminated. The compensation covers damages caused by incineration of contaminated game meat, so as not to discourage hunters.

Bayerische Staatsforsten, which inspects game meat captured in its forests, incinerates meat which contains more radioactive cesium than the maximum legal limit and provides certificates for meat whose cesium content was within the limit. The carcasses are sold to wholesalers at around 5 euros per kilogram, according to the firm.

Seerieder pointed out that the number of wild boars which registered cesium content above the legal limit is increasing this year, saying that meat from such boars amounted to some 20 percent of the inspected meat. According to Seerieder, most of such boars are those which eat Elaphomyces granulatus, a kind of truffle which grows underground and tends to accumulate radioactive cesium from soil. Since wild boars dig into soil and eat them when they cannot find enough nuts and berries, radioactive cesium is likely to accumulate in their bodies.

People in Germany are still feeling the consequences of Chernobyl’s fallout. The number of applications for compensation in the nation was 17,346 between 2004 and 2012 for wild boars, but the number between January and August 2013 reached 4,272. 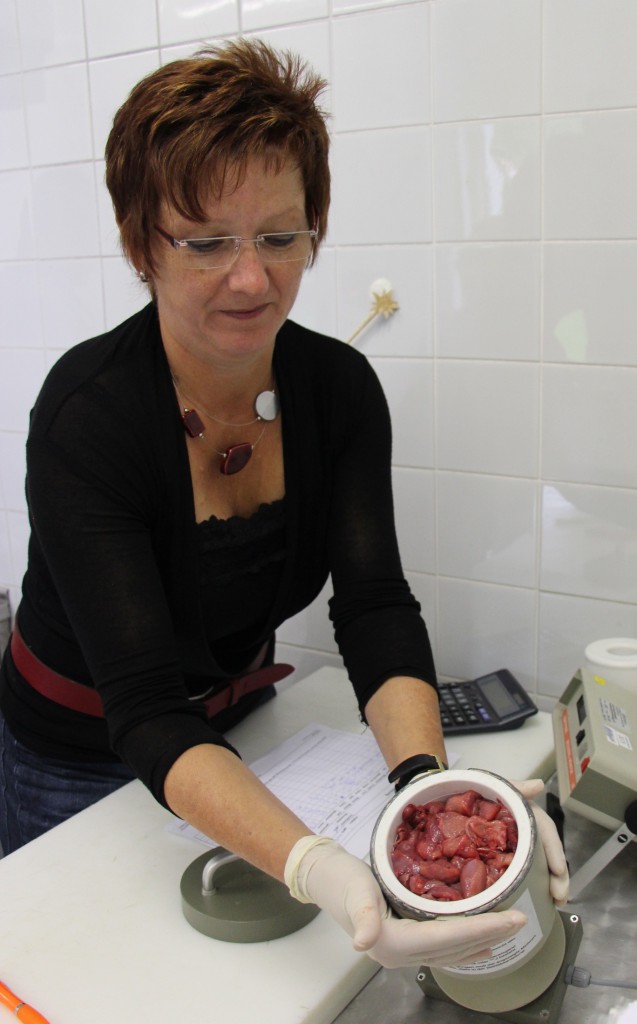 A staffer of Bayerische Staatsforsten’s inspection center in Munich, Bavaria, checks the level of radioactive cesium in game meat, which takes only about five minutes.

The habitats of wild boars have expanded southward to alpine regions, and the living environment for wild animals is recently changing, as heat waves resulted in shortage of nuts and berries which they feed on. Joachim Reddemann, managing director of the Bavarian state’s hunting association, said that radioactive cesium is detected more in the southern districts of Bavaria, adding that more inspection centers should be established to ensure safety of game meat.

This entry was posted in Food & Agriculture and tagged Series. Bookmark the permalink.